BY DAVE NATHAN
October 5, 2002
Sign in to view read count 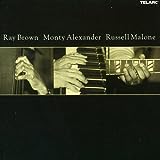 At the risk of being cloying and maudlin, one knows that all good things must come to an end. But you don't have to like it. This his final coda, a two CD-set for Telarc, is the last known recording of one of the most prolific, rewarding (especially for his legions of listeners) and successful in jazz history. Reading Ray Brown's discography is about the same as reading the history of recorded jazz. To try and select one or even two handfuls of the "best of Ray Brown" would not only be patronizing, but an exercise in futility and not especially productive. It's fitting that one of the participants on this final session is Monty Alexander, with whom Brown started gigging way back in the 1970's and they have been going steady ever since. Malone, on the other hand, is a relative newcomer to the Brown circle, but has worked himself in very comfortably, thank you. This album is a happy, amiable, good natured get together including some examples of Brown as a pioneer in bop bass. But most of all it highlights his roots as a swinging jazz man. The bassist really believes that jazz had to move in order to make sure it was not taking itself too seriously. This was happy music, not the solemn, sad and smooth stuff being produced by too many contemporary artists. To say that he will be missed is a meaningless, gratuitous understatement. The key is to retain enough of his spirit to assure that the music remains healthy and on course. This fine release by Telarc will surely help in that regard.

There are a number of decent, but not outstanding, Brown sites on web. One of he better Brown bios can be found at Telarc .