Art instructed me to play a certain rhythm behind him. At the time I didn't think that it fit. I thought about it for a minute and was getting ready to tell him that, when I said to myself, 'Hold on, that's Art Blakey. He must know what's he's doing.' When we finished the song and listened to it, I realized he was right.

As he approaches his 74th birthday, Ray Barretto is the world's most famous conga player, the elder statesman of salsa. Unlike most other septuagenarians Barretto is neither looking forward to retirement or back on his career. Instead, he is reveling in a new role—that of leader of a jazz band.

Brooklyn-born Barretto grew up in the barrios of the Bronx and Spanish Harlem, where he was exposed to the popular music of his Puerto Rican heritage, but like many other young Americans he was also enthralled by the big bands of the Swing era. It was within the sound of this music that he found "spiritual salvation" from the trials and tribulations of a young man living in a poor minority household.

At the age of 17 Barretto enlisted in the army to escape the prejudice and poverty that was all too common to Latinos in New York. In Germany he met vibraphonist Fats Sadi, who hipped him to "Shaw 'Nuff" by Dizzy Gillespie and Charlie Parker on the PX jukebox. Later Ray heard Dizzy's recording of "Manteca" with Chano Pozo. "That song blew my mind," he recalls. "It was the basis of my inspiration to become a professional musician."

Shortly thereafter, Barretto found himself in a club where military and European musicians often jammed together. Removing the calfskin head from a banjo he sat in with the band, inauspiciously beginning his career as a jazz percussionist. When he returned home he bought his first set of conga drums and began developing his skills in the city's many jam sessions.

Art Blakey was a regular performer and listener at the many uptown sessions where Barretto was beginning to carve out a niche for himself on his congas. One night after hearing him perform, Art, who had already developed an appreciation for hand drummers during his travels in Africa, liked what he heard and invited the young percussionist to play with him. Ray recalls being both excited and intimidated. "I didn't know what we were going to do, but Art just got up there and kicked the night off with one of his long drum solos and I just played, trying to accompany the band and not get in his way." 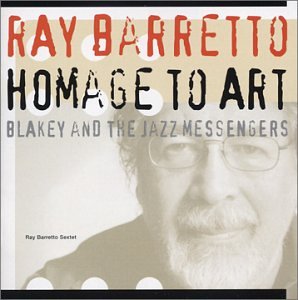 Fifty years later, he finds himself back where he started, accompanying the band and not getting in the way. Except that now it's his band. The newest recording by this musical legend is his first "pure" jazz outing as a leader and appropriately enough it is an Homage to Art Blakey (Sunnyside). It may very well be his best record yet.

Early in his recording career Ray regularly played straight ahead jazz with many giants of the music, including Cannonball Adderley, Gene Ammons, Lou Donaldson, Red Garland, Wes Montgomery and Sonny Stitt. Then in 1961 Barretto, who had succeeded Mongo Santamaria in Tito Puente's band, asked Orrin Keepnews to give him a Latin date as a leader to capitalize on the burgeoning charanga craze. Following two records for Riverside, he "accidentally" scored a hit with "El Watusi" (on Tico), propelling him into salsa stardom and the potentially confining role of a Latin bandleader.

Ray found his popularity to be both a blessing and a curse. "At some point, I had to discard certain jazz tendencies in order to understand the nuances of traditional Latin musics. Though I was making jazz and Latin records at the same time, it was a struggle to get away from certain habits when you were strictly trying to play one music. My jazz credentials nearly went out the window." As the musical director of the Fania All Stars, Barretto helped pioneer the contemporary salsa movement, but the '60s were a volatile and incendiary time in the Latino community. The percussionist's later bands reflected his restlessness with the status quo, incorporating elements of jazz, rock and electronics on his albums. In 1990 Barretto began an association with Concord Records. Desirous of his own identity, Ray founded New World Spirit to play what he describes not as Latin jazz (a term he feels is innacurate), but as jazz with a Latin flavor. "Because I love and respect the genre of jazz, I want to make sure that whatever we do has the language of jazz held in highest esteem. That differentiates us from most bands that come under the 'Latin jazz' category (the notable exception he makes is that of Jerry Gonzalez and the Fort Apache Band). We play jazz with me providing the Latin overtones—the Latin air about it—but it's still something that caters to and respects jazz at the highest level possible." On 2000's Portraits of Jazz and Clave (RCA), an augmented New World Spirit primarily pays tribute to Ellington's enormous contribution to Barretto's love of jazz. Though it definitely pays enormous respect to the genre of jazz, as the clave in the title implies, the Latin flavor is prominent in the mix and it is unlikely that a listener would mistake it for a Duke record.

Homage To Art Blakey, on the other hand, is a positively convincing example of the saying "imitation is the sincerest form of respect." This truly sounds like a Jazz Messenger record. While Blakey's inimitable, explosive drumming, both polytonal and polyrhythmic, may never be duplicated by a single player, the combination of Barretto's congas and Vince Cherico's drums come close. The rhythm and sound of Ray's conga lines are powerfully reminiscent of the tom tom figures that Blakey incorporated into his playing to give it its distinctive AfroCuban spirit and that spirit comes to life throughout the disc. Barretto recorded with Blakey as part of the large percussion ensemble featured on the drummer's Holiday for Skins (Blue Note) nearly 45 years ago. Playing with Blakey was one of the high points of the young conga player's career. Ray remembers the experience well. "Art instructed me to play a certain rhythm behind him. At the time I didn't think that it fit. I thought about it for a minute and was getting ready to tell him that, when I said to myself, 'Hold on, that's Art Blakey. He must know what's he's doing.' When we finished the song and listened to it, I realized he was right."

For Homage to Art Blakey, Ray, a long time discophile, went through his Messenger collection to choose the date's repertoire. Half of the tunes he selected were composed by Wayne Shorter. "I hadn't planned it that way. It just so happened that the more I listened, the more I felt his music best fit, melodically and harmonically, with what we wanted to do." Much like Blakey, the leader made sure that the band members contributed to the date. Pianist Luis Perdomo penned imaginative arrangements of Shorter's "United, Sleeping Dancer Sleep On", and "Noise In the Attic", and the lyrical standard "Close Your Eyes". Barretto called upon former New World Spirit trumpeter Mike Mossman, who played many times with Blakey, to arrange the album's final Shorter piece, "Lester Left Town", as well as the traditional "Frere Jacques", Ray's tribute to the classic Messenger version of "Three Blind Mice".

Barretto asked the group's trumpeter John Bailey to compose a ballad for the date and was rewarded with the beautiful "Ballade for Buhaina". "It's my favorite piece on the record," the proud leader beams. The fiery Bailey is also featured on bassist Hans Glawisching's funky arrangement of Lee Morgan's "Buh's Bossa" along with alto saxophonist Miguel Zenon, the newest member of the band. The leader is particularly happy with the way the two horn players' sounds blend together throughout the date. Ray is eagerly anticipating performing the music from Homage to Art Blakey live at the Blue Note this month, on a double bill that will also feature the great Messenger saxophonist/composer Benny Golson. Also on the horizon is Ray Barretto's retrospective JVC concert at Carnegie Hall this June that will feature both the new group and a reunion of his salsa orquestra. An appropriate look back on the career of a giant who continues to look forward.