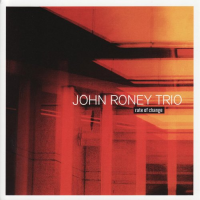 Since moving from Toronto in 2001, pianist John Roney has climbed the ladder of the Montreal jazz scene with remarkable speed. For the past couple of years his trio with bassist Zack Lober and drummer Jim Doxas has been hosting the Montreal Jazz Festival's late night jam sessions, and it would be difficult to find a better group for the gig. Rate of Change, Roney's second disc as a leader, is the first to feature his current trio and receive significant distribution.

Revealing remarkable maturity for three players not yet in their thirties, this program of Roney originals draws from various sources, but it's largely informed by an ECM-like aesthetic. Recalling the freedom of pianist Bobo Stenson, "Inertia" builds gradually from a stasis that nevertheless has a distinct sense of melodic purpose, finally resolving into harmonic and rhythmic motion in its final minute. "Go" directly references British pianist John Taylor's "Clapperclowe," from drummer Peter Erskine's You Never Know (ECM, 1993), ultimately shifting into a solo section that swings harder than Erskine's more rarefied trio ever did—at least on record.

The trio's ability to dig in a little harder distinguishes it from both Stenson's and Erskine's ECM recordings. And while the modernistic yet distinctive harmonic approaches of Stenson and Taylor are clear precedents, Roney also goes directly back to the source of both: Bill Evans. "Motivation" and its reprisal, "Re: Motivation," revolve around the three over four rhythm that was an Evans trademark. "Third Degree" is a more complex amalgam, its rhythmically-staggered head reminiscent of Brad Mehldau, but the minor blues of Roney's solo more direct. The contrapuntal classicism of the title track's theme also feels more Mehldau than Stenson, Taylor or Evans.

Still, while it's possible to pick out those who have influenced Roney, he's no mere imitator. Roney may be less densely-clustered than Taylor, less explicitly virtuosic than Mehldau, less abstract than Stenson and inherently more harmonically evolved than Evans. But pieces of each come together in a more immediate approach that also places a strong emphasis on clear form and a graceful lyricism that avoids the obvious.

The trio's deep chemistry—evolved through time and working together in various musical contexts—results in simpatico moments that are often felt more than heard. Doxas is a particularly fluid, responsive and dynamic player who can be either explicitly propulsive or implicitly suggestive. Lober—more Haden than Holland—keeps things simple during his few brief solos, but is all the more effective for it.

With nothing to prove, there's an appealingly subtle unpredictability at the core of Roney's trio. Rate of Change is a conversational encounter where a shared comfort level actually allows the trio to view nothing as off-limits.