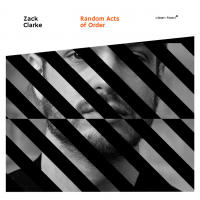 While initial impressions might imply that Clarke operates in a similarly abstract sphere, the bulk of this album evokes a more straightforward piano tradition. At least until you listen closely. Then it becomes apparent that while the standard syntax is acknowledged in the constantly recalibrated relationships between the three instruments, they purposefully avoid overt melody or sustained rhythm. It seems the title isn't just a poetic metaphor. It neatly sums up, in tongue-in-cheek fashion, how the cohesive fragments emerge from a flowing seemingly amorphous interaction.

The electronics recur in "Elements" and "Celebrate Unity," two short cuts which serve as cooling interludes between meatier fare. "Act 1" and "Act 2" are among the standouts, where Clarke atomizes the piano trio into agitated pizzicato growl, chattering drums and piano shards, culminating in rampaging lines with a choppy undertow in the former, and taking on an almost fractured swing in the latter. In a demonstration of emotional reach, the set concludes with "Dee," an unaccompanied piano meditation full of inner tension and oblique lyricism.

On this showing it's clear that this is a triumvirate of names to watch out for in the future.

Before the cause; Act 1; Elements; Low Gardens; Up on the High; Celebrate Unity; Act 2; Dee.