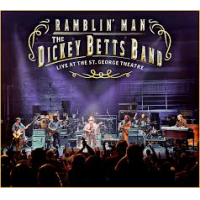 Dickey Betts does not add to his reputation with Ramblin' Man: The Dickey Betts Band Live at the St George Theater. To be fair, he doesn't significantly sully reputation as an icon of Southern rock either, but that's just testament to how firmly established is his position in history as co-founder of The Allman Brothers Band, brilliant co-guitarist with its leader, the late Duane Allman, and composer of many of the iconic group's most memorable tunes (including its sole mainstream hit from 1973, from which this release takes its main title).

Nevertheless, while this 2018 concert offering from a historic New York venue reasserts Betts' valiant intentions to honor the late Gregg Allman—as well as that aforementioned Southern rock legacy—it only serves to reaffirm the diminution of his skills, so clearly in evidence in the years following his ouster from the Dixie-rock pioneers and prior to his ostensible retirement. Repeated hearing and/or watching this combination of CD and Blu-ray (confoundingly, there is no DVD counterpart), simply ratifies the first impression(s), particularly for any fan who's seen the guitarist/composer in the intervening years. The impeccable audio mastering by Sterling Sound is hardly for naught, but only clarifies those shortcomings.

For instance, as Dickey Betts introduces Devon Allman to join his group in performance of one of his fallen comrade's signature songs, "Midnight Rider," the slight slur in his speech only foreshadows a nagging sense of struggle subsequently arising his guitar playing (and to a slightly lesser extent his singing) on the prior two numbers on this CD; it's not that Betts didn't hit the notes on the opening instrumental, "Hot Lanta," or his own trademark tune "Blue Sky," it's that he didn't hit them authoritatively even with the readily discernible effort he was making. Likewise unmistakable is the sluggish pace of the concluding "Jessica," though the lively, durable changes of the song itself renders this take listenable despite the band's torpor.

There's an even greater sensation of drag from the outset of "In Memory of Elizabeth Reed." Betts composed this number to conjure a languid air in the early going, but here it's clearly slowed to accommodate the integration of its author into the performance. As point of comparison, hear guitarists Duane Betts (offspring of the man at the top of the bill) and Damon Fowler exchange solos in fleet succession before a peppy piano interlude of Mike Kach's. Long-term familiarity with the tune over nearly half a century allows Dickey to acquit himself respectably on his solo turn, but the forced quality of his playing is unmistakable as he wavers on notes and transitions.

Static as is the double drums interlude, Pedro Arevalo's bass spotlight regenerates momentum for the septet opening the way, albeit somewhat clumsily, for a "Whipping Post" roughly half the length of the twenty-one minutes plus excursion. Here Kach offers a vocal eerily similar to that of the man who wrote it, so while it may not be fair to compare this rendition to any of the original band or, for that matter, its succeeding lineups, its mere adequacy on its own terms might genuinely please ABB idol-worshipers (of which there are more than a few, judging from response to the 2018 shows.)

Ramblin' Man: Live at The St. George Theatre concludes with a closing couplet identical to that of the Blu-ray bundled with the compact disc (and further corresponding to the double-LP set of vinyl). There is a certain raggedness that can add to a musical performance, but "Ramblin' Man" and "Jessica" do not radiate that quality well: each would benefit more from the precision that earmarks the originals and so many subsequent version(s). As a result, while there are some flashes of brilliance over the course of just the seventy-one minute duration of the compact disc, the (overly?) laudatory essay of Wade Tatangelo rings a bit hollow.

So, while the clean tone and exacting fretwork Dickey Betts perfected long ago does reappear at times, those passages come and go too fast to leave a lasting and positive impression. It may be disrespectful to speculate, much less dwell upon, the fall-off of his once impeccable skills as depicted here because to do so would bring disproportionate attention to the inevitable effects of aging, a phenomenon hardly uncommon in the world of the inveterate working musician. There is no evidence of proportionate adjustment under those circumstances. however.

Still, such observations are only in keeping with a perspective that this title cannot seriously sully this man's standing as a major player of a musical movement: even with Betts' somewhat mottled personal history, his credentials as guitarist and composer are above reproach, skills he galvanized as titular bandleader for the Brothers in the period immediately following Duane Allman's passing. As a result, the inherent shortcomings of this dual package, formatting and otherwise, will no doubt pale over the course of time, and perhaps allow the recroding serve as a document of the capabilities of the band who perform so earnestly in support of Dickey Betts here.

In that light, the photographs on the front and back of this package (and its enclosed eight-page booklet) tell the story: in the former shot, the man is surrounded by the group, while the latter captures an empty stage with no one standing at the microphone front and center.