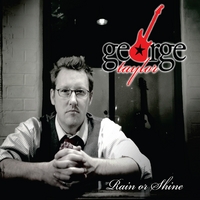 Observation One. George Taylor looks like the cross between a small-town pharmacist and a junior account. Observation Two. Taylor is touted as a blues musician who toured the Mississippi River Delta in search of that singular blues inspiration. It is funny that his resulting recording Rain or Shine should sound as if born of Jimmie Rodgers if he had been born and raised in the Delta Leland rather than the interior Meridian. I suspect that Taylor's experience recording the disc at shine Studios in Austin, TX are what led to the roadhouse/honky tonk flavor of Rain or Shine. No matter, this is some of the most honest and genuine country music to emerge independently in some time.

Taylor, a multi-instrumentalist, populates this project with ten compositions so organic and tactile they are like listening to whiskey with a sandpaper texture (if one could do that). He favors over-driven harmonicas and sinewy slide instruments like dobros and lap-steel guitars recorded analog for that "warm" sound. Pieces like "Only Blue" illustrate exactly how close Jimmie Rodgers (and Hank Williams, for that matter) was stylistically to the Delta. The sheer power of "Breakin' in Boots" with its rock harmonic structure, make this music as old as the last century and as immediate as right now.

Rain or Shine is as murky and low-fi as Exile on Mainstreet (Rolling Stone, 1972) and more vital than two-thirds of the Alt-Americana being produced today. The disc's heart is conjured on "Harvest Moon," The "Ventilator Blues" of Rain or Shine. Taylor is an artist to watch closely and assimilate into a properly considered playlist.

Goodnight; The Hard Way; Railroad Song; What am I Gonna Say; Scenery; Only Blue; Breakin’ in Boots; Harvest Moon; The Rain; Seat With Your Name.