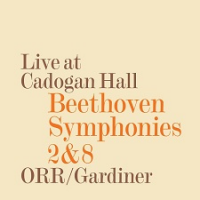 The 2012 release of Live at Carnegie Hall: Beethoven Symphonies 7 & 5 (Soli Deo Gloria) was a tease. John Eliot Gardiner and his Orchestre Revolutionnaire et Romantique appeared set to reprise his 1990s survey of the Beethoven symphonies. These performances were scintillating, every bit as fine as Carlos Kleiber's 1975 5th & 7th with the Vienna Philharmonic. This possible cycle was exciting because Gardiner had recently complete his famous Bach Cantata Pilgrimage and was ripe of a similar endeavor. This coupled with the orchestra's Silver Anniversary and it appears the stars are aligned.

The specter of a new Beethoven Cycle became brighter with the release of Beethoven Symphonies 2 & 8, Live at London's Cadogan Hall. Again, Gardiner has shipped his considerable forces into fighting shape to address an early and late symphony from the Master from Bonn. The Symphony No. 2, perhaps Beethoven's most Hadyn-esque symphony, is given a frantic reading with tempi exceeding that of his previous recording and possibly of that of Roger Norrington's controversial 1987 performance on EMI. This 2nd will appeal to many of the period instrument/performance camps, but may be off-putting for the more staid and conservative listeners. The sonics are pristine and clear, captured in such a way that the listener may walk amongst the music as it is performed.

In Beethoven's warm-up to his magnum opus, Gardiner again employs fast tempi. His direction and the orchestra's performance is a high-wire act, and, as such, bears the excitement of running off the rails as part of its appeal. Effervescent and shining, this "lighter" symphony is given a breathing personality that is both outgoing and friendly.