Roil: Raft of the Meadows 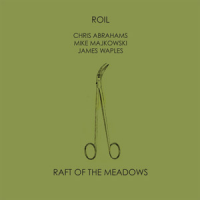 Established in 2007, Roil comprises three Australians from the Sydney jazz scene, sharing pianist Chris Abrahams with that other better known Antipodean combo The Necks. Like that last outfit Roil manifests as an egalitarian concern, continuing in the lineage trailblazed by Bill Evans in the 1960s via Howard Riley's trio with Barry Guy a decade later. But in contrast to this template, on their third release Raft of the Meadows (as was also the case with its predecessors) all the numbers are collectively credited and show no indication of compositional intent.

The dominant characteristic of the group is a conversational interaction most obvious at the start of both sides of this limited edition LP. Each participant absorbs the statements by his colleagues and responds in kind. Unlike other practitioners of the art such as the Portuguese RED Trio or French pianist Eve Risser, pitch and tonality remain conventional and fully recognizable throughout. Instead the invention comes through inspired sound placement, and the tension which derives from contrasting approaches. In particular Abrahams and drummer James Waples pull in different directions to good effect, as on "Life Event Kit" where fast streaming piano tugs against a slow moving rhythmic carpet, woven from seemingly random bass and drum interjections.

Waples' assertive flurries and tumbling clatter often form the least fixed component in the animated discourse. Bassist Mike Majkowski acts as an understated fulcrum mediating the opposing forces, notably on "Bone Collar" where his pliant muscular pizzicato begins the piece, and then holds it together in the ensuing interplay. Although the pianist frequently crafts appealing melodic runs, he also sometimes undercuts them with preparations which distort the timbre of his instrument. However he often gravitates towards minimalism in his reiterated subtly evolving patterns. That's apparent on the title cut, where Abrahams' flowing lines transform into urgent Morse code signals once they encounter Waples' disruptive percussion. With exposure such as this Roil will likely be a name to watch in Europe as much as Down Under.