By Ian Patterson
December 22, 2014
Sign in to view read count 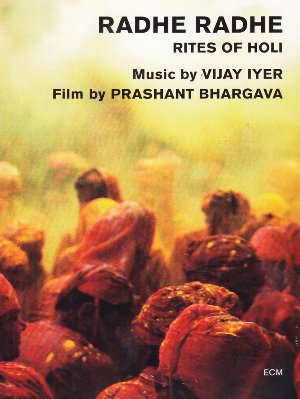 Radhe Radhe: Rites of Holi is a sumptuous visual and sonic collaboration between Vijay Iyer and film maker Prashant Bhargava. It was commissioned by Emil Kang, Executive Director of the Carolina Performing Arts as part of a wider series of works to celebrate the centenary of Igor Stravinsky's The Rite of Spring (1913), which in its day, with its avant-garde orchestration, ballet and elaborate stage design was something of a multi-media show-stopper itself.

Though Bhargava based his visual narrative on the episodic template of Stravinsky's work, the main inspiration comes from the spectacular Hindu spring festival, Holi. In early 2012, Bhargava went with cinematographer Craig Marsden to Mathura, an ancient holy city in Northern India and the mythic birthplace of Krishna and Radha, to film the eight-day festival.

Anyone who's ever experienced Holi for a single day in India, let alone eight, will appreciate the testing conditions that the film crew would have experienced. The festival is a veritable assault on the senses, a continual explosion of color, noise and movement where social norms are inverted in dizzying, orgiastic celebration. It's an exhausting, often tense but ultimately liberating experience, beautifully conveyed by Bhargava and Iyer.

It must have been a monumental task to edit the many hours of footage, to distil the essence of the event into the thirty five minutes presented here. Iyer then composed the score, which perhaps inevitably, is heavily influenced by the undulating rhythmic cycles captured by Bhargava of one of the world's most intoxicating festivals.

Just as Iyer's music cannot be separated from Mike Ladd's poetry on a previous CPA commission, Still Life With Commentator (Savoy Jazz, 2007), so too on Radhe Radhe: Rites of Holi the pianist's score is intrinsically bound up in dialog with Bhagarva's images.

With a lesser orchestrator and technician than Iyer it would have been easy to succumb entirely to Bhargava's seductive visual poetry, with the music relegated to second plane. Iyer, however, is finely attuned to the dramaturgy unfolding and his highly empathetic score traces the arc between the myriad manifestations of the festival's early morning preparations and the unfolding maelstrom of mass euphoria that follows. To the initial frames of nature—so still they seem to be photographs—the dual pianos of Iyer and Cory Smythe impose contrasting tension—a harbinger of the drama to come.

Holi is a celebration of the love between Krishna and the mortal-born Radha; Iyer's score accordinly balances gravitas and lyricism as the faithful amass in the temples to pray and dance in worship. Images of nature rotate with the sensual figure of Radha—played by actress Anna George—symbolizing perhaps the meeting of the earthly and the divine, not only in Radha and Krishna's relationship, but in the festival as a whole, which is devotional and primal. A single flute or bassoon, a brief touch of vibraphone or subtle electronics conjure a sense of the prevailing mystique, while the pulsating percussive rhythms chime with the throngs of uninhibited revelers dancing in the streets and throwing handfuls of powder that explode in brightly colored clouds.

Bhargava's flowing images reference the episodes of Stravinsky's Rite of Spring: there are parallels between the moshing gangs of youth and the tensions that arise among them and Stravinsky's Ritual of the Rival Tribes; the single file of beautifully attired, shrouded women echoes Stravinsky's Procession of the Sage while the ecstatic dancing relates to the Dance of the Earth.

A striking scene, whereby a circle of women armed with long sticks ritually beat—though with some venom—a man protected by a small, circular shield is suggestive of the Mystic Circles of the Young Girls; the scenes of Radha—more goddess than mortal—suggest the Glorification of the Chosen One, while the towering bonfire around which the euphoric crowds dance symbolizes the Sacrificial Dance.

In a rousing finale that lasts fully four minutes, these elements combine in a visual mosaic of sharp editorial cuts with the rhythmically urgent International Contemporary Ensemble—conducted by Adam Sliwinski—at full throttle. Iyer pulls some of the sounds of the chanting, cheering crowds but it's the pounding piano motif and Tyshawn Sorey's thundering drums that are at the epicenter of this heady climax.

A bonus eighteen-minute 'making-of' documentary features interviews with Iyer, Prashant and Marsden who shed light on the project from initial concept to its premier at the Memorial Hall, University of North Carolina in March, 2013.

Vivid, sensual and emotive, Radhe Radhe: Rites of Holi is a wildly stimulating ride. It's undoubtedly a celebration of the devotion to Radha, but also of the power of music and cinema combined to make us experience the world around us in new ways.