By John Sharpe
September 1, 2013
Sign in to view read count 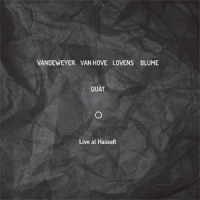 In one sense the cover of Quat Live At Hasselt could act as a metaphor for what lies within, due to its focus on a narrow spectral range. At first glance the black appears uniform, punctuated only by the white text. But on further scrutiny, an intricately patterned network of various shades of grey becomes apparent, like the view while flying over mountains at night. Of course the original comparison oversimplifies the wondrous exploration of percussive potential contained within the four collectively negotiated excursions.

And it also overlooks the breadth of approaches deployed by pioneering Belgian pianist Fred Van Hove, who magpie-like steals from both jazz and contemporary classical tropes, but jumbles them into an idiosyncratic mélange. At times he is undeniably percussive, whether on the keys or the guts of his instrument, but he leavens those tactics with a panoply of legato lines alternately lyrical and abstract. However in a quartet completed by vibraphonist Els Vandeweyer and two percussionists, the emphasis inescapably revolves around what can be hammered, beaten, brushed or scraped. A strong ethos of communication and responsiveness pervades proceedings such that although totally improvised the music moves as if in accord with its own internal logic. No-one seems tentative. All four know their roles and concentrate on delivery with the minimum of fuss or ego.

Vandeweyer draws a variety of unusual textures from her vibes, largely eschewing the typically tolling tones, even evoking steel pans on occasion. Behind the trap sets, Paul Lovens and Martin Blume create a conversational mesh of taps, hiss, rumbles, thwacks and thuds which abhors steady tempo. Although at times they take opposing stances, more often they major in similar territory derived of momentum and color, though unfortunately there is no indication as to which man is in which channel meaning that it's not possible to differentiate between them. While the trajectories defy description, flurries of rhythmic intent emerge from an ebb and flow which seems as natural as breathing, leading to some lovely moments such as that at the close of "H2" where after a ringing climax, everything stops to leave a lone cymbal rattling, like a sign swaying in the wind after some cinematic Armageddon.