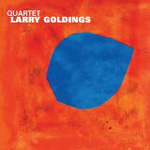 Because he's placed so much emphasis on the organ in recent years—most notably his ongoing trio with guitarist Peter Bernstein and drummer Bill Stewart—it's easy to forget just how good a pianist Larry Goldings can be. Even though the two instruments share similar configurations, it's not inherently easy to transfer skills from one to the other. Witness how many guitarists are truly awful bassists, for example, despite the fact that the two instruments share four strings in common. When it comes to keyboards, elements like touch, texture and sustain make it necessary to approach each species with a unique mindset.

Stepping away from the comfort zone of his longstanding trio, Goldings puts himself in a considerably riskier position. Not to say that the Bernstein/Stewart trio don't take chances, but those chances are born of a chemistry developed over considerable time. Mind you, Goldings doesn't completely jettison the idea of longer term relationships. Bassist Ben Allison and drummer Matt Wilson—two players who have collaborated on numerous past projects, including the Herbie Nichols Project—share built-in telepathy, also manifested through Goldings' association with Wilson's Arts and Crafts project. Goldings has also worked with trumpeter John Sneider over the years. This quartet may be a new entity, but it has plenty of history behind it.

Goldings approaches the cover material with respect but also the necessary irreverence, making the right instrumental choices every time. Monk's "Jackie-ing begins in a staggered way but ultimately resolves into the most heavily swinging tune of the set, with Goldings' piano solo paradoxically looking backward and forward at the same time. Björk's ethereal "Cocoon finds Goldings layering a cushion of Wurlitzer and glockenspiel beneath Sneider's spare melodic voice. Ibrahim's "The Wedding is played like the hymnal it is, with Goldings' spiritual organ work the clearly logical choice.

Goldings' two contributions are equally diverse. He layers piano and accordion on "Dario and Bario, a waltz that would fit perfectly in an Antonioni film, while the lyrical quality of "Singsong is offset by Wilson's Motian-esque elasticity, Allison's untethered bottom end, and Goldings' spur-of-the-moment responses to Sneider's primary voice. The straight-ahead "A Dream About Jaki Byard and In a Silent Way-like musings of "Hidalgo find the quartet in free improvisation mode, but always with a collective sense of purpose and an unassailable drive to go in the same direction.

"We Shall Overcome, Goldings and Sneider's closing duet, makes a strong statement with utmost subtlety, rather than a big stick. It's the perfect finish to a record where eclecticism never overshadows Goldings' distinctive approach, whatever the instrument.