BY STUART BROOMER
April 3, 2009
Sign in to view read count 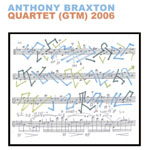 Anthony Braxton's Ghost Trance Music is a vast continent, a central preoccupation for the composer from 1995 to 2006 that would take in about 100 compositions. The first examples, "Composition Nos. 181-184," were recorded by a quartet. Each piece was characterized by the hypnotic continuous lines of equal length, evenly accented notes suggesting endless melody. The pattern remained but scale soon changed, resulting in larger ensembles and lengthy performances. In the decade that Braxton largely devoted to the Ghost Trance series he occasionally scaled down to duets and trio but rarely returned to the original quartet format of his own reeds and rhythm section. This release is a visually striking four-CD set that does just that but takes its four pieces toward the lengths associated with the larger ensembles, individual performances ranging from 47 to 63 minutes. Duration has increasingly become an integral part of the series, emphasizing the defining temporal elements of metronomic insistence and continuous melody that together can suggest a deeply hypnotic, clockwork eternity.

The quartet here consists of young musicians associated with Braxton at Wesleyan. Max Heath is an adept and adaptable pianist whose name hasn't turned up in other Braxton projects, however, he's consistently imaginative, often finding fresh ways to negotiate the challenges of Braxton's music. Bassist Carl Testa and percussionist Aaron Siegel are familiar figures from other recent Braxton performances and each engages the space afforded them by the more open spaces of the quartet.

As the material stretches out, dilating time, resemblances develop to Braxton's pre-GTM quartets and the combinations of jazz-derived, composed and improvised elements. Sudden and surprising textures spring from the group at every turn, whether it's the very beautiful hand-damped piano strings and bowed bass harmonics of "340," the elusive sopranino saxophone with wiry cymbal noise and delicate upper register piano that suddenly merge together in "No. 341," or the fluttering soprano lines with scraped cymbals on "No. 346." That level of orchestral richness is only one of the pleasures of these adventures in Braxton's later Ghost Trance methodology.