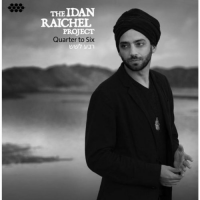 Since emerging at the helm of his Project roughly a decade ago, Israeli composer, keyboardist and bandleader Idan Raichel has spirited through rarified air: He co-wrote a song for racial harmony with Israeli President Shimon Perez, and performed at the Martin Luther King Jr. Memorial inaugural ceremony in Washington, DC. He performed "Gift of Acceptance" with collaborator India Arie at the 2010 Nobel Peace Prize Awards ceremony in Oslo (Norway). In 2011, Raichel was voted musician of the decade in polls conducted by the Israeli news media. In 2012, he teamed with Malian guitarist Vieux Farka Toure for the acclaimed collaboration Tel Aviv Session (Cumbancha, 2012).

"After ten years with the Project, I feel we have reached a time of change and reflection, a transition period, both musically and personally," Raichel explains. Although Quarter to Six features collaborations with artists from multiple nationalities and generations, these myriad tribes and tongues fail to obscure the profound beauty of Raichel's music.

Quarter to Six (which Raichel divides into Parts A and B) cuts 16 small scenes in and out of each other to create a long, tall and broad musical tapestry. Like most major Jewish holidays, it begins at sundown, with "Yored Ha' Enev (Evening Falls)," as strings lift up and bear Raichel's vocal and acoustic guitar heavenward. "Achshav Karov (Closer Now)" extends this simple but beautiful instrumentation with bass, drum and flute; "Ba'Layla (At Night)" opens with a brilliantly dark string ensemble that parts like a curtain to reveal Raichel's solitary contemplation on piano.

The guest turns on Quarter to Six sound no less brilliant. In "Sabe Deus (God Knows)," Ana Moura sings first in Hebrew, and then in Portuguese; her vocal is gorgeous in either language. An Arabic song that showcases Israeli-Palestinian singer Mira Awad, "Ana Ana wa Enta Enta (I Am What I Am)"unleashes a whirling dance that arises like a dervish from clattering percussion and twirling strings.

Vieux Farka Touré returns to Raichel's side as they jointly embrace "Mon Amor (My Love)" with acoustic guitar and percussion cascading into the melody that softly dances with their half-spoken, half-sung, fully earnest vocals.

German counter-tenor Andreas Scholl's vocal, starkly cast against piano, is absolutely stunning in the timeless "In Stiller Nacht (In a Quiet Night)," which swells like a storm and then disappears like mist. "Or Ka'ze (A Light Such As This)," featuring Orthodox Israeli singer Ishai Ribo (who needed permission from his Rabbi to participate because it is generally forbidden for a male singer to be included on an album that also includes female singers) brings Quarter of Six to its powerful and beautiful conclusion.

Part A: Yored Ha’Enev (Evening Falls); Achshav Karov (Closer Now); Rak Oto (Only Him); Ba’Layla (At Night); Sabe Deus (God Knows); Ana Ana wa Enta Enta (I Am What I Am); Ad She’Ein Yoter Le’An (Until There’s Nowhere Left); Ha’Ru’ach Ha’Zo (This Wind); Part B: Mon Amor (My Love); Chaim Pshutim (Simple Life); Olam Shalem (A Whole World); Detrás De Mi Alma (Behind My Soul); Be’Karov (Soon); Im Ha’ita Ro’eh (If You Would Have Seen); In Stiller Nacht (In a Quiet Night); Or Ka’ze (A Light Such As This).

About The Idan Raichel Project