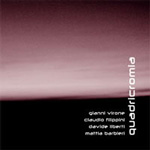 An astonishingly compelling debut album from four Italian musicians in their early to mid-twenties, one of them just out of the conservatoire, three of them still studying, Quadricromia is full of the daring and enthusiasm of youth, but it has a depth and substance way beyond its years.

Such is the commonality of conservatoire training among emerging musicians today that many of them don't get to the coal face until their mid-twenties or later. We tend to forget it wasn't always so. Miles Davis was playing with Charlie Parker when he was nineteen; Lee Morgan with Dizzy Gillespie's big band when he was eighteen; and Stan Getz with Benny Goodman when he was seventeen and Stan Kenton when he was sixteen. If you had talent and were serious, such precocity used to be the norm.

Whatever. All ten tracks here are originals: four are written by saxophonist Gianni Virone, two by pianist Claudio Filippini, and four more are collective improvisations. The latter, "Quadricromia 1" through "4," are the most consistently impressive, running—but not rushing—through a medium-sized galaxy of textures, dynamics and emotions, from the pretty and beguiling to the fierce and elemental. Virone and Filippini each create interesting new sonorities (Virone with lower register distortions, Filippini with what sound like plucked strings). Mattia Barbieri is a delightfully melodic drummer and percussionist in the Paul Motian mode, preferring out-of-time counterpoints to straight timekeeping. The musicians interact with each other constantly, and all four take developmental initiatives on equal footing.

Because of their relative youth, some of the musicians' formative influences are still readily apparent. Virone at times sounds like Getz in the middle and high register on the tenor saxophone, where he favours a langorous vibrato. On soprano and lower register tenor, he's closer to Coltrane's sound in his classic quartet. (It's not, perhaps, such a strange combination. Coltrane once observed, "Of course, we'd all like to sound like Stan.") Filippini's inspirations are equally diverse. On the opening "Absurd Step" there are traces of barrelhouse, Errol Garner, Monk, Lennie Tristano and Cecil Taylor, all in the space of two choruses. But each musician in Quadricromia is far more than simply a bundle of influences, and each is already acquiring an individual voice. An unusually engaging debut album.

Note: Quadricromia is performing in London at the Pizza Express Jazz Club on March 1 and 2.