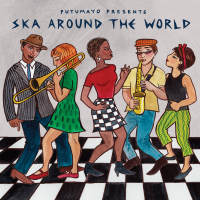 For casual fans and newcomers to the music of Jamaica (a growing number, given the popularity of the BBC / France 2 TV mystery series Death in Paradise and its Jamaican-infused soundtrack), the definitions of ska vs. reggae are likely too obscure to worry about. Much as only hardcore jazz fans worry about drilling into the differences between cool and bop, those who simply love the sun-drenched rhythms of all the postwar popular styles of Jamaica are content to listen to the music and not fret over whether a song is most properly classified as ska or reggae—or dancehall, dub or rocksteady, for that matter.

Putumayo World Music's Ska Around the World is a delightful exploration of Jamaican music and its global influence. The collection includes tracks from bands hailing from as far afoot as St. Petersburg, Russia, Amsterdam, and Basque country. Most of the tracks are dripping with the island rhythms, with most of them also having streaks of other styles local to their home base.

Still, even taking such a broad view of the music, the Dutch band, Zazí, is the one act that doesn't really fit in here. "IJssalon Bernardo," has a few Jamaican flourishes, with a muted ska beat and bright horn charts, but the overall feel is that of a Eurovision entry. It feels as if Abba had No Doubt backing them for a song. On the other hand, it's an absolutely hook-filled pop nugget.

But that one hiccup in stylistic consistency is dwarfed by the rest of the collection.

The album starts off strongly, with a contribution from Brazil by the Orquestra Brasileira de Música Jamaicana. "Atlântida" is a swing-ska mashup with a lilting beat that falls somewhere between Kingston and São Paulo. It's one of those delicious meldings that looks like it shouldn't work on paper, but the band pulls it off flawlessly.

The Basque band Akatz performs in Spanish, providing another multicultural intersection set to music. It's more downtempo than the opening track, but is still completely anchored in the rhythms of Jamaica.

Jamaica itself is represented by The Skatalites with a 2001 track, "Glory to the Sound." It's not one of their signature hits and was recorded long after their heyday, but still shows a band at the top of its game—tight arrangements impeccably performed.

The Russian St. Petersburg Ska-Jazz Review, approaches ska the way Brian Setzer or the Squirrel Nut Zippers approach swing: updated for a new generation, with modern flourishes and a contemporary sensibility. The New York Ska-Jazz Ensemble comes at the music from a similar sensibility, and both bands give ska a full-throated big band sound—as if Dizzy Gillespie had leaned toward Jamaica instead of Cuba.

But the absolute highlight of this collection is "Ecos de Radio Iguana," by North African world beat star Sarazino. From a purely technical standpoint, this track probably isn't any more ska than the Dutch band referenced above. And yet, he so utterly integrates a ska vibe into the fabric of his own vision that it feels completely at home here. His approach is not too far off from the better-known Manu Chao, in that he borrows freely from everything and in so doing creates something fresh and new and instantly unforgettable.