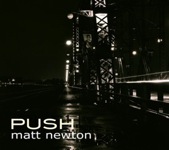 Newton's music reflects his sense for melody and his ability to weave a string of stirring ideas over a compact under-layer of chords. The program balances his compositions deftly to lend them a nice overview.

Petr Cancura (saxophones), a fine cohort, sets up "Take Aim" with a potent evolution of the melody. He vents a stark atmosphere of phrases on tensile turnstiles. Newton adds to the ambiance, diffusing his runs across a well defined canvas that is blobbed with sharp interjecting chords. When Cancura returns to unfurl a heady beacon of flying lines, the intensity roils and leads into a slamming climax.

The gentle side of the band is profiled on "Through Valleys," a ballad that is set up by Newton with a wistful, delicate air. His interaction with Mark McIntyre (bass) and Ethan Ardelli (drums) is seamless, the dynamics stirring a soft fall of colors.

"Push" evolves constantly. Cancura's tonality is dark and sharp, scouring alleyways and springing quick surprises. Newton moves from that though, augmenting the tune with a lighter devolution before slamming down and getting into a meatier pulse. The composition is molded by the vision of the players to bring in an indelible presence.

If Newton continues with the same commitment and focus, he will be one to watch. .