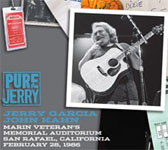 The Pure Jerry series of Jerry Garcia archive releases was on hiatus of sorts while The Grateful Dead's business agreement with the Rhino label was fully implemented. This single disc recording from February of 1986 reopens the archives and features the titular leader of the rock icons in top form as he partners with bassist John Kahn.

The guitarist/songwriter/singer developed one of his most stable and abiding musical relationships with Kahn over the years and they've been featured together in a variety of contexts both live and in the studio. This live recording, from Marin County's Veteran Memorial Auditorium, features their relationship in what is perhaps its purest form, live and in a duo setting. Garcia virtually chirps his way through his vocal on "Deep Elem Blues" and plays with a clarity that carries over into "Little Sadie." Here Kahn's presence becomes noticeable, though almost imperceptibly so: the bassist is unobtrusive, more felt-heard, in the soft underpinning of combined melody and rhythm beneath the front man's acoustic guitar.

Exhibiting none of the physical infirmities that culminated in a near-death coma the summer of this same year, Garcia touches all the bases of his solo repertoire on this hour-plus CD. Beginning with traditional folk music, originals written with longtime Dead lyricist Robert Hunter such as "Friend of the Devil," demonstrate what a natural outgrowth of the tradition are those collaborations. Garcia and Kahn take a lovingly loose approach to such tunes (also including "Dire Wolf" and "Ripple"), replacing the easygoing charm of the band's arrangements. The duo doesn't wholly eschew improvisation either; toward the performance, the duo stretch "Birdsong" in a spirited romp that nevertheless preserves the tune's exquisite changes.

Songs specifically written for Garcia's own projects, such as "Run for the Roses," don't display the same well-wrought level of inspiration as those of The Grateful Dead—there is such a thing as being craftsman-like to a fault—but then there are those selections from Bob Dylan's work, to which Jerry Garcia remained deeply connected throughout his career. The easy-going good humor of "When I Paint My Masterpiece" is particularly well-suited to his personality, so the cheerful rendition of it here is not only one of the highlights of the set, but one of the best versions of the oft-played tune appearing in his solo discography.

Capturing two instruments and a single voice (Kahn doesn't sing at all) presents no great technical challenges, sonically speaking, but the recording of this February 1986 show, overseen by engineer John Cutler, not only catches the timbre of the instruments but the intimacy of the performance in the two thousand seat venue. Joe Gastwirt's mastering preserves the natural camaraderie of the two musicians in all its quiet glory as well.