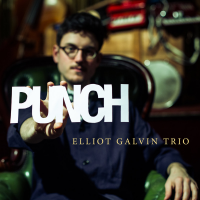 Punch is the follow-up to British pianist Elliot Galvin's debut album Dreamland, released in 2014 and his first for Edition Records. The title track opens with an ancient recording of a Punch and Judy show which forms a recurring leitmotif within the number and at a few other points throughout the album. The ensuing trio's performance contains all the vituperative attack of Mr Punch, replete with fascinating staccato interludes of interspersed and alternating bouts of silence, the Punch recording and the trio.

"Tipu's Tiger" is as near as Galvin gets to a pastoral outing, but this number is rapidly juxtaposed, via a Punch-spoken interlude on the nine second micro-track "Rolling," with manic stylophone and phenomenally dextrous melodica on "Blop." There are several boppy quotes on "Lions" and Tom McCredie even manages a fleeting impersonation of Slam Stewart's simultaneous bass and singing routine. A dirge-like double stopped bass line heralds the lugubrious, short "1666" which is infused with delicate piano, brushed snare and percussion.

The only track not written by Galvin is a beguiling deconstruction of "Mack The Knife," a dark and brooding interpretation, the melody incongruously yet subtly introduced by Simon Roth on glockenspiel over a cascade of unremitting pulsating block piano chords emphasising every second beat, followed by frenetic piano soloing and closing with a dainty revisiting of the theme. "Polari" originates from the Italian verb parlare to talk, but is more commonly known as an esoteric form of British slang. Here the "talk" is translated into fleeting runs of accelerando and ritardando.

The whistling at the beginning of "Cosy" sounds eerily reminiscent of The Beatles "Real Love" meets Django Bates but when the bass, drums and lower register of the piano cut in it's nearer to "Lady Madonna," which is relevant considering that Galvin's stated influence on this track was the Fabs "A Day In The Life." It still manages to repeat a "Real Love" coda at its close, however, the very end of the piece does indeed channel the dramatic final piano chords of "A Day In The Life."

With Punch Elliot Galvin has produced an even better album than his first, excellently iconoclastic recording, and whilst his compositions might initially appear challenging, they're actually quite brilliantly inventive, retaining the pianist's idiosyncratic style and wry sense of humour.