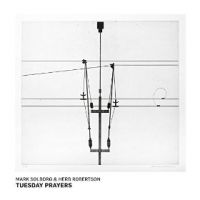 Nothing will come out of nothing, but maybe, if two musical friends meet in a sacred place, notes will start to sing.

In the beginning, everything is just a sketch, a preparation for actual composition. The ancient flute whispers and a steel string guitar maps the railroads of faraway places.

The flute becomes a trumpet and says, "I know you." They have played together before, Herb Robertson and Mark Solborg. Tonight, they speak together through music. Steel strings bending and the gurgling sound of brass in the night.

Lines so beautiful they shine like a light. Sound becomes a hymn. Music becomes a prayer. Every day is a gift. Time to say "Tuesday Prayers." The place is a church. It's called Concert Church and the place is Copenhagen, but it does not matter.

Music can't be captured in words and it is therefore it has to be heard, not seen as words on a page. Still, there is a visual image on the cover. The wires of artist Rasmus Nelleman speaking about the beautiful structure of architecture in the shape of a telephone wire. The music speaks in lines, babbling, whispering, electrifying and acoustic. Sounds become melodies. Abstract motifs become emotions, flesh and blood. Silence and reflection. Then, suddenly it is over. The concert has ended, and two years later, an album emerges: Tuesday Prayers

The Flute; I Know You; Tuesday Prayers; Slideswitch; Shout, Landscape and Goodbyes.