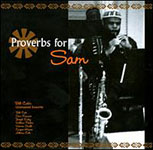 Master of semi-exotic Eastern double-reed instruments, Bill Coleman has spent most of his professional life as an academic. Criminally under-recorded, when Seasoning the Greens, a 2001 concert of his Untempered Ensemble was released in 2002, fans of freely improvised worldbeat jazz only had to wait one year. So the question raised by Proverbs of Sam is: what took so long? Featuring the three long improvisations that comprised the Ensemble's set at the Vision Festival in June of 2001 and a fourth track from the concert that gave us Seasoning the Greens, it is dedicated to the memory of the late Sam Furnace who passed away in 2003.

Where Greens offered a global tour of rhythms, Proverbs plays more like a Best of Sam Furnace, with the African-centric beats remaining fairly consistent while Furnace's solos jump from the speakers. In addition to his buzzing sona (China), shenai and nagaswaram (India), Cole blows Ghanaian flute and didgeridoo while Furnace is featured on alto and Joseph Daley patrols the bottom on baritone, trombone and tuba. From time to time the three hornmen clash as their lines overlap but their hyperactivity serves as counterpoint to the pulsating rocksteady rhythms of drummer Warren Smith and percussionist Atticus Cole. Bassist William Parker links both halves together and, as a fringe benefit, Cooper-Moore whacks his diddley bow. Proverbs for Sam is a fitting tribute and carries a spiritual weight not found in most run-of-the-mill world music projects.

Don't Wait for the Day of Battle Before Getting Your Weapons Ready; If a Blacksmith Continues to Strike an Iron at One Point, He Must Have a Reason; The Drum Sounding a Message in War Is Beaten in a Cryptic Manner, Only Wise Men Can Dance to It, and Only Experienced Men Can Understand It; No One Knows the Paths in a Garden Better Than the Gardener, a Follower Should Always Allow His Guide to Lead.