By Troy Collins
September 28, 2008
Sign in to view read count 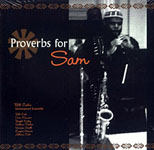 Proverbs for Sam is dedicated to the late saxophonist Sam Furnace, a charter member of double reed master Bill Cole's Untempered Ensemble. The majority of the album is culled from the 2001 Vision Festival in New York, while the majestic finale is drawn from the same 2001 Burlington, Vermont concert documented on Seasoning of the Greens (Boxholder Records, 2002). These live recordings feature some of Furnace's last performances with the Ensemble, who passed away in 2004.

Since the early nineties, Bill Cole's Untempered Ensemble has straddled the tenuous line between East and West, its instrumentation and approach seamlessly combining multiple styles and genres. The Ensemble boasts an impressive rhythm section in percussionists Warren Smith and Atticus Cole, ubiquitous bassist William Parker and the mercurial multi-instrumentalist Cooper-Moore, who plays his usual assortment of home-made instruments, including the otherworldly diddly-bow. Cole, Joe Daley (baritone horn, tuba and trombone) and the late alto saxophonist/flutist Sam Furnace form a dynamic front line that can caterwaul and croon in equal measure.

An educator and author, Cole has explored the expressive capabilities of Asian double reed instruments in a jazz context for almost four decades. His virtuosity on digeridoo, Chinese sona, Ghanian flute, Indian shenai and nagaswarm infuses his writing and improvising with a pan-global authenticity that avoids dilettantish exoticism. While not a member, Cole continues the ancient to the future tradition espoused by the AACM, invoking the past while venturing forth into uncharted territory.

Titled after Yoruban proverbs, the four lengthy pieces that comprise the album each embody different aspects of rhythm, harmony and tonality with ample solo space for each member of the group. The opener builds from pneumatic horn charts and tribal polyrhythms into a collage of roiling percussion, sputtering brass and thorny reeds.

Tendrils of spectral melody drift along a languorous rubato pulse on the second tune, as distant vocal cries offer a ghostly meditation on the blues. The third introduces a loping beat drawn from the African Diaspora that fuels a riotous thicket of polyphony before climaxing in a blistering New Orleans-inspired Second Line run. The epic closer begins with a serene mosaic of ethereal flutes and scintillating accents before spiraling into a fervent, collective miasma.

A bracing merger of East-West traditions recorded in the presence of an appreciative audience, Proverbs for Sam is a vibrant investigation of pan-global musical possibilities and a celebratory ode to a beloved artist.

Don't Wait for the Day of Battle Before Getting Your Weapons Ready; If a Blacksmith Continues to Strike an Iron at One Point He Must Have a Reason; The Drum Sounding a Message in War is Beaten in a Cryptic Manner, Only Wise Men Can Dance to It, and Only Experienced Men Can Understand It; No One Knows the Paths in a Garden Better Than the Gardener, a Follower Should Always Allow His Guide to Lead.