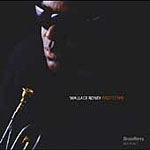 On Prototype , his first album in four years, trumpeter Wallace Roney continues to develop ideas begun on Village ('97) and No Room For Argument ('00). That is to say, as the liner notes describe, "Miles' playing and his album Nefertiti as one link; Weather Report as the compositional link; Mwandishi (pianist Herbie Hancock groundbreaking early '70s fusion band) as the conceptual link, with John Coltrane as the spiritual link."

Roney's links to Miles Davis have been written about and, perhaps, overexaggerated. There is no doubt that Roney's playing and concept of openness stems from Miles and a time in the late '80s when Roney was hanging with the Prince of Darkness. But whereas Miles changed direction countless times during his career, Roney has chosen a starting point for his music—that of the transitional Miles period of Nefertiti through Filles de Kilimanjaro —and steadfastly evolved the idea, incorporating contemporary technologies and rhythms, painting a picture of where Miles might have gone had he been more evolutionary than revolutionary.

Take "Then and Now," with its "I Got Rhythm" changes. It may start out as the most mainstream-sounding piece on the record, but only for about thirty seconds as it quickly breaks down into a freer piece, with wife Geri Allen peppering the song with abstract harmonies while bassist Matt Garrison and drummer Eric Allen play loose and elastic with the time. But while the track unquestionably fits within the context of the album as a whole, it is something of an anomaly.

"Cyberspace" opens the album with a dark and deep funk groove, Roney and brother Antoine on saxophone stating the attractive yet edgy theme while keyboardist Adam Holzman, who spent time in Miles' late '80s bands, colors the piece with sharp chords and subtle washes. Similarly, "Shadow Dance" finds an expanded horn section building the extended theme over a 3/4 ostinato before heading into more exploratory territory, with guest Don Byron delivering a particularly pungent solo. The title track is a tender ballad, but even though it is one of only two completely acoustic tracks ("Then and Now" being the other), it brings a sense of freedom to the more closely-adhered changes that lends it a consistency with the rest of the record.

It is, in fact, this sense of freedom that pervades the whole record, giving it a sense of urgency. That's not to say this is exactly free jazz; rather it is more open-ended jazz where a firm sense of rhythm exists throughout, but with harmonic and thematic liberation the group is less concerned with hanging on specific changes and, instead, uses harmonic devices as a jumping off point, much as early Weather Report did.

Prototype continues to evolve Roney's conception of jazz, one that successfully combines inarguable roots with a more contemporary view, incorporating a diversity of influences into a blend where the fundamental notion is that of freedom, but, like Miles before him, with a clearly-defined rhythmic and harmonic basis.