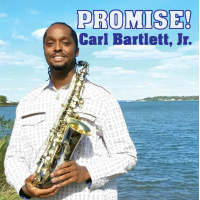 Winner of the USA 2015-16 International Songwriting Competition Jazz Category, Carl Bartlett Jr. showcases his skills on PROMISE!. The album's warm, vivacious compositions offer plenty of cheer and good feelings. The result is guaranteed to bring a Billy Higgins smile to your face. Bartlett's alto sax playing is equally sunny. Like Bobby Watson or Donald Harrison, he offers strong and graceful phrases that slip and slide through the songs in clever and fascinating ways.

Not to be outdone, Bartlett's bandmates reinforce the sweet, friendly, jovial ambience of the album with exceptional playing. There are no weak links in this chain. Every member cooks with gas.

The album opens with the title cut, "PROMISE!" Bartlett's solo quickly evolves from a sharp intro into straight-ahead bop and engaging motifs. It's as if his music were floating in the clouds. Listen to the tonguing of the reed and the rapid-fire sax notes—always controlled and centered on the melody. Yoichi Uzeki contributes with a boisterous piano solo of his own, and Sylvia Cuenca adds to the mix with some top-notch drumming.

More serious in nature, "Dialed In (Like a Laser)" begins with a flutter on the reed—followed by a sax improvisation. The tune gives Uzeki a chance to stretch, and his solo exhibits lots of ups and downs, strikes and sprawls. Cuenca adds her rhythmic skills and uses the entire trap set to shift the music in meter and syncopation.

Of all the joyful tunes on the album, "The Bartlett Family" may be the most jubilant. This one highlights the trumpet playing of Bartlett's uncle, Charlie Bartlett. Together, the Bartletts and Uzeki provide sharp bop playing while the bass and drums settle in behind the magic.

With a bluesy solo, Uzeki begins the ballad, "As the Gift Unfolds Before My Eyes." What follows is Bartlett's solo, conjuring city lights emerging on a late afternoon in setting sun, thoughts of a pleasant stroll along a beautiful river that opens to the ocean. The atmosphere is echoed in Marcus McLaurine's bass playing over Cuenca's brushwork.

The graceful theme of "Ethereal Heartbeat," swoops forward as if flying through the sky. McLaurine's poetic and intense solo leads into a Uzeki solo that delights and sparkles.

The closing number, "It's Been So Grand" features Bartlett and his uncle. The theme is never forceful; the music just flows. Uzeki follows the duo with a blues modal solo. His fingers dance and cascade on the piano until Bartlett takes over with a bubbly hot sax solo. Drummer Cuenca gets into the action again with some choice statements that go back and forth with the ensemble.

PROMISE! is open, heartfelt, and sincere. Nothing is hidden. Everything is exposed. For those who relish walks in the sun, the fragrance of flowers, fresh air, and the warmth of family and friends, this album is for you. Recommended.

PROMISE!; High Pizzazz; Dialed In (Like A Laser); As The Gift Unfolds Before My Eyes; The Bartlett Family; Ethereal Heartbeats; Fidgety Season; It's Been So Grand.