By Mark Corroto
February 24, 2017
Sign in to view read count 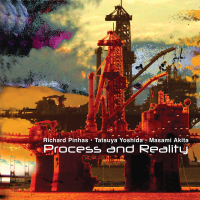 Since guitarist Richard Pinhas' returned to music in the 1990s, his appetite for touring and recording with various artists has produced an impressive array of albums. Another generation knows him from his 1970s work with the prog/space/electronic rock outfit Heldon. Current listeners await each new solo release and encounters with the likes of science fiction writers Maurice Dantec and Philip K. Dick, Oren Ambarchi, Wolf Eyes, and Noël Akchoté. For many listeners it is Pinhas' collaborations with the Japanese musicians Keiji Haino, Masami Akita aka Merzbow, and Tatsuya Yoshida that propels him into superstardom.

The four musicians have toured and performed together, and Pinhas has worked with each artist individually, producing multiple recordings. Of note are the Cuneiform releases Pinhas/Merzbow Keio Line (2008), Rhizome (2011) and Paris 2008 (2011) and His duo with Tatsuya Yoshida Welcome In The Void (2014).

Maybe it is the hardcore and noise aspects of Merzbow and Yoshida's music that is the attraction for Pinhas, but those two elements play a secondary role on Process And Reality. Separated from the drummer's outfits, the Ruins, Zeni Geva, Acid Mothers, and Korekyojin and Merzbow's solo efforts and work with Boris, Mats Gustafsson and Full Of Hell, the collaborative trio has more of a developed, better yet, developing/expansion sound.

The music borrows its title (and themes) from the 1929 book by English philosopher Alfred North Whitehead. Consistent with the thesis, the music is a swirling vortex of energy. Where Whitehead preaches a continual process of objects (sounds) that exist independently but are defined by their interactions with other objects (musicians), this studio recording offers an almost ceaseless growth. Sandwiched between the brief "TVJ OO (Intro)" and its cooling-off "TVJ 77 (Quiet Final)" are two orderly disorderly pieces, "TVJ 33 (Core Track)" and "TVJ 66 (Non-Sens)." Grown from a progressive processed synth-guitar sound, the ever constant construction of the music necessitates that the listener go along for the ride. Tatsuya Yoshida's free drumming is more rock than jazz, and Merzbow's electronics eschew the harshness for a more compatible, dare we say, euphonious sound? If Process And Reality is the soundtrack to a post-industrial dystopia, let's make sure we surround ourselves (like Pinhas) with like-minded friends.