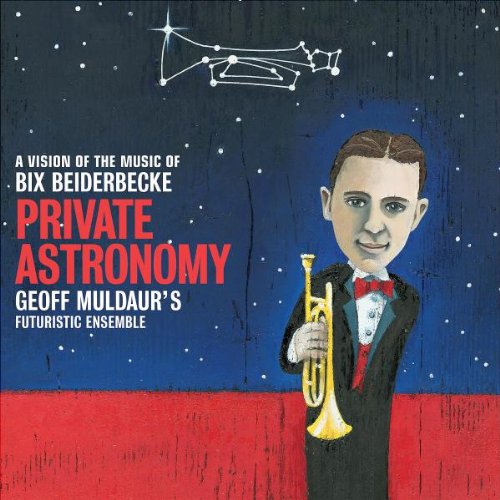 It is certainly not by accident that the Universal Classics Group is the label imprint on Geoff Private Astronomy—A Vision of the Music of Bix Beiderbecke. The rarely heard piano compositions of Bix Beiderbecke are majestically transformed into American chamber music by the loving touch and musical panache of another American original, Geoff Muldaur. For release during the Bix Beiderbecke Centenary, Mr. Muldaur’s recording of Leon "Bix" Beiderbecke compositions, and compositions associated with the coronetist, can not so much be termed a tribute disc as eine hommage. Taking what are essentially sketches for piano pieces; Mr. Muldaur builds a precipice out of the notes on the staff using the tonal palette of reeds and brass capturing the whimsy and humor of the roaring ‘20s.

Included and elaborated on are five Beiderbecke piano compositions, only one of which was recorded ("In A Mist"). "In the Dark," "Candlelight," and "Flashes" were transcribed by Beiderbecke’s editor Bill Challis and exist as sheet music. "Davenport Blues" was developed from his famous band recording. Mr. Muldaur was very specific on the treatment of these recordings. A core of instruments including violin, clarinet, alto saxophone, trombone, and baritone saxophone were assembled and arranged for the recording. Beiderbecke’s coronet solos would be played per transcription by other instruments. For the music associated with Beiderbecke, if Bing Crosby sang a song with the Rhythm Boys on the original recording, then a single voice (either Muldaur, Loudon Wainwright, or Martha Wainwright) would sing alone. Songs originally sung by Frankie Trumbauer were presented via the vocal trio of the Harmony Boys (Muldaur, Wainwright, and Greg Prestopino).

The resulting recording is a fully realized suite from Hemingway and Fitzgerald’s Jazz Age. Muldaur’s voicings on the instrumental selections are as delicate as a lily and pungent as honeysuckle. The vocal arrangements are perfectly suited for the period, one of gaiety and joy and hopeful abandon experienced before the Great Depression. Mr. Muldaur called upon the likes of Wynton Marsalis, Randy Sandke, Ted Nash, Dan Levine, and Butch Thompson for the recording, all of whom played with dedication and reverence (though, not enough to strangle the pieces). The sum of all of these parts is easily the finest jazz recording of 2003.

Take Your Tomorrow (And Give Me Today); In The Dark; There Ain