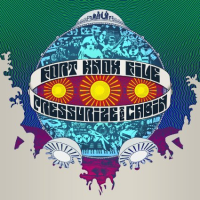 Pressurize the Cabin delivers the best of the club dance experience—funky grooves, spacey loops and echoes, scratches and samples, shout outs and call outs—without overpriced drinks or the ubiquitous smoke, glitter or perfume. The core four of the Fort Knox Five—Sid Barcelona, Jon Horvath, Rob Myers and Steve Raskin—herewith present a jumping party that's just waiting for you to climb onboard.

"Reach" smoothly opens pop, funk, R&B, hip-hop, electronic and groove styles, then blends them all into the FN5's one of a kind instrumental smoothie, as Flex Mathews' rap flows strong and deep as the Mississippi. And it's almost TOO easy to grab and hold onto the instrumental hook and vocal melody of "Whatcha Gonna Do," with a closing vamp so locked down that this section of the Cabin sounds airtight.

The FN5 also find ways to be creative within the groove. "Swinging on a Rhyme" introduces modern electronic funk to the tempo and sound of classic swing music, complete with a rumbling big-band drum break and antique-sounding production on the guitar and horns. Ashley Slater, on loan from the UK, leads "Fire in My Belly" with a vocal that's cool and laconic yet deeply in the pocket, while his trombone saunters through the mix like it's strolling down a sunny New Orleans jazz avenue.

"Cinco to the Brinco" sketches in Spanish trumpet and Latin hip-hop plus shades of the Caribbean from reggae toasting by vocalists Felix Perez and Frankie Rosado on loan from DC's Latin legends The Empresarios. The straight-up reggaeton of "24 Hours to Set It Off," featuring Sleepy Wonder from Thievery Corporation, dives even deeper into Caribbean waters. Clever song titles can often be more pun-ny than funny, but "Mission to the Sitars" works thanks to instrumentation that layers sitars into the horns, synthesizers, percussion, shouts and raps, and hip-hop beats of its frothy funk parfait.