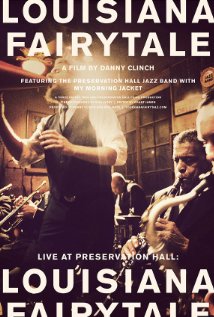 Once upon a time there was a progressive rock band, My Morning Jacket. They were invited into one of the grandest music venues in the world, Preservation Hall, to play with the legendary jazz band. In another "only in New Orleans" moment, they created music together, and filmed the encounter for all to see. For My Morning Jacket, it was a Louisiana fairytale. For the rest of us, it is an interesting encounter beautifully filmed by director and photographer Danny Clinch.

Preservation Hall's creative director and bassist/sousaphone player, Ben Jaffe, contnues on his quest to enlarge the audience for traditional jazz with this DVD of the Preservation Hall Jazz Band playing with My Morning Jacket and their lead singer Jim James. In 2010, the PHJB recorded 12 tunes with emerging and legendary singers on their album, Preservation (Preservation Hall). On that disc, James provided the voicings through a megaphone for the tune "Louisiana Fairytale," a song many might recognize as the theme song for the PBS program This Old House. The album worked well and serves, as Jaffe hoped, as a cross-over album for jazz, rock, country and independent music fans alike.

Like the album, the intention of this hour long DVD is to create new musical partnerships, and bring traditional jazz to a new audience. While some see traditional jazz as a museum piece, Jaffe and Clinch show in this film that the style has much to offer present day music. Through Clinch's beautiful cinematography, we are able to see how the members of My Morning Jacket are influenced and awed by playing with some of the best New Orleans musicians, as well as playing in the hall that has hosted so many greats in traditional jazz.

Clinch's videography is stunning and made easier by the warm gold tones of the aging hall. First time visitors to Preservation Hall are often shocked by its small size and worn paint, but once the music begins, that is all forgotten and the room takes everyone back to a time when only traditional jazz existed. It all begins to make sense, as is portrayed in the beginning of the film with PHJB playing alone on some traditional tunes such as "Shake It and Break It," "Sweet Substitute," and "St James Infirmary." The film then begins to add members of MMJ, with James reprising his "Louisiana Fairytale" complete with megaphone. Both bands join together to perform their take on the late New Orleans icon Ernie K-Doe's "Mother-in-Law," before the hall is turned over to MMJ with James on vocals and guitar, Tom Blankenship on bass, Patrick Hallahan sharing the iconic Preservation Hall drums, Bo Koster taking a turn on piano and Carl Broemel on guitar and sax. The bands come back together to play a rousing version of the MMJ tune "Highly Suspicious" before dispersing to the streets of the French Quarter for a traditional second line, complete with dozen of marchers who joined the fun.

To those purists who see the hall as sacred space for traditional jazz, the sight of a modern rock band taking up the space may be unsettling. However, jazz has always been influenced by, and an influence on, other forms of music. It is how the music evolves. And it is not the first time PHJB has played with popular bands, having shared the concert stage with the likes of Bob Dylan and Grateful Dead, among others. This is the 2011 version of those collaborations with the present band consisting of Jaffe, Rickie Monie on piano, Joe Lastie on drums, 78 year old Charlie Gabriel playing clarinet, Frederick Longo hitting remarkable low notes on trombone, Mark Braud singing and playing trumpet, and with the crooner Clint Maedgen doubling on saxophone. Several interviews with these musicians reveal their excitement at the opportunity to reach a younger audience with their music.

This film will no doubt educate MMJ fans to the history of the hall and New Orleans jazz, with archival film of the hall, early Preservation Hall bands and jazz funerals, as well as an explanation by Jaffe regarding the obligation New Orleans musicians feel to pass the traditions on to the next generation. As he explains, most of the music in New Orleans is not written down, but passed down in an oral tradition at second line parades, in jazz venues or on front porches and garages where musicians gather. In the film, Jaffe states, "That's what's so beautiful about what we do at Preservation Hall. What makes the projects we do so special is the way we embrace our traditions and we embrace our history and our past. And yet the music we play is so present and today. It has a universal message that keeps the band looking forward."

This film is both a documentary and a concert film. It shows how musicians from opposite ends of the music spectrum can come together and make something special. It illustrates that you do not have to throw out the old to make way for the new. One actually can build on the other, and the influence can go in both directions. It's not an easy fit, but it works. It is a visually beautiful film, entertaining, and educational at the same time. It will no doubt appeal to both Preservation Hall and My Morning Jacket fans.

During the credits, an important event occurs, though most will not understand its significance—Jaffe makes red beans and rice and gumbo for the members of My Morning Jacket. In New Orleans, this is akin to making someone your blood brother. You become a New Orleanian through your ears and your stomach—the music you hear and the foods you eat bring you into the culture of this city from a young age. You think and act differently than anyone else in the world because of this influence. When a New Orleans native likes you, they invite you to their home for dinner. They feed you into the culture.

At the conclusion of several Greek mythologies, the gods recognize certain mortals who should be elevated to gods and give them a mixture of ambrosia to bring about that transformation. In New Orleans, that ambrosia is red beans and rice. For My Morning Jacket, this meal was a transformative ending to their Louisiana Fairytale.