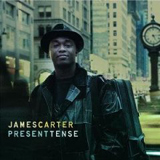 Omnipresent in the late 1990s, James Carter's output has been erratic ever since Atlantic Records (his former label) dissolved their jazz department in 2000. A pleasing return to form, Present Tense is the poll-winning multi-instrumentalist's first recording in three years, ably produced by the renowned Michael Cuscuna, whose goal was to "capture the breadth of James' mastery of this music."

After a string of concept albums, including the electric free-funk of Layin' In The Cut (Atlantic, 2000), an acoustic Django Reinhardt tribute, Chasin' The Gypsy (Atlantic, 2000), a string-laden homage to Billie Holiday, Gardenias For Lady Day (Columbia, 2003) and the recent ode to seminal indie rockers Pavement, Gold Sounds (Brown Brothers, 2005), Carter returns to more conventional territory on his Emarcy Records debut.

Carter demonstrates his diverse talents on an array of horns in a subtly varied program that is closer in spirit to his early DIW recordings than his recent thematic output. An accessible mix of ballads, blues, bop, swing and Latin tunes, the bulk of the session consists of obscure covers, with three pieces written by the leader.

Although he possesses a notorious penchant for showy pyrotechnics, Carter is a staunch traditionalist at heart—this session highlights his poetic side, largely avoiding histrionics. A nostalgic vibe permeates the session, further reinforcing Carter's tough but tender approach.

The album mixes up-tempo fare with languorous excursions, swinging from the first note with the brisk bop of Stanley Turrentine's "Rapid Shave." Adams and Jackson contribute pithy statements before Carter launches the tune into the stratosphere with a capricious baritone solo. Carter handles the big horn with imposing dexterity on Gigi Gryce's up-tempo cooker "Hymn of the Orient."

Only "Song of Delilah" sounds out of place with its subtle hip-hop rhythmic inflections and overdubbed tenor—his chosen horn on the percussively buoyant "J.C. Bossa." "Tenderly" closes the album with an extended feature for the leader's supple baritone and Adams' Harmon-muted horn.