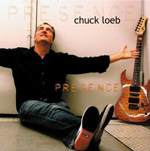 Presence, a gorgeous, lyrical album, provides a suitable showcase for Chuck Loeb's technical proficiency and impressive range. You don't just hear Loeb. You can almost see him creating the music. Maybe that's a shout-out to the recording process, but Loeb's guitar playing is crystal-clear and right up front. He's not a splashy musician, but you can tell the man knows his licks. He knows when to turn on the technique, as when his fingers dance along the strings on the moody groove of "The Music Outside." The piano solo of Loeb's regular pianist, Mike Ricchluti, is reminiscent of Bob James at his best.

Equally impressive is how effortlessly Loeb moves from the bouncy funk of the opener, "Good to Go," to the sensual and exotic "Llevame," with superb vocals from his wife, Carmen Cuesta-Loeb, a talented guitarist herself. And just when it didn't seem the world needed yet another interpretation of Steely Dan's "Rikki Don't Lose That Number," Loeb breathes new life into the old warhorse via a snappy interchange between his guitar and Dave Mann's flute.

Nothing on Presence seems artificial and forced. There's nothing here that would make you wince and say, "Why did they put that song on the album?" Everything meshes and feels like it belongs. Nothing seems contrived to pander to radio programmers for airplay or other commercial concessions. Loeb has chosen to surround himself with musicians and poerform songs that complement his own sublime artistry.

Let's not be overly analytical about this, though. This impressive album showcases Loeb's undeniable command of the guitar, and Presence is a clear sign that 2007 is getting off to a good start.

Good to Go; Rikki Don't Lose that Number; Window of the Soul; Starting OVer; Llevame; Presence; The Music Outside; The Western Sky; Hangin' With You; Mr. Martino; Shed A Little Light.