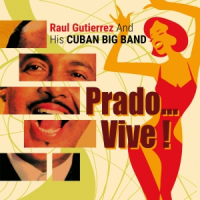 At the start of the 1950s, Cuban bandleader Perez Prado, the subject of this tribute album, led the hottest big band in Cuba. By the end of the decade, he had been crowned the King of Mambo by the Latin American diaspora in New York City, too, and his cameo appearances in Hollywood movies had helped make him a favourite with audiences across the world. Prado passed in Mexico City in 1989, a few weeks after the publication of Oscar Hijuelos' Pulitzer Prize-winning novel, The Mambo Kings Plays Songs Of Love (Farrar, Straus & Giroux), which drew copiously on his life story. The precision-tooled exuberance of Prado's music is undiminished sixty years after the event. Even at its most kitsch, as on 1955's "Cereza Rosa," his cover of Louis Guglielmi's pop hit "Cherry Pink (and Apple Blossom White)," Prado's sound remains irresistible to all but the most po-faced.

The Chilean-born saxophonist and bandleader Raul Gutierriez led the Latin-jazz band Irazu in Germany in the 1980s and early 1990s, before returning to the Americas. He recorded Prado... Vive! in Havana with a specially assembled seventeen-piece band plus vocal chorus. The album was originally released on the Cuban label Caribe in 2012. In 2021 it has been reissued by the Berlin-based label, Cugate Classicos Latinos. Eight of Prado's best known originals are included, along with Benny More's "Bonito Y Sabroso" and the aforementioned "Cerezo Rosa."

The Cuban Big Band is an authentic-sounding ensemble of fine musicians which cannot be faulted on a technical level. But sad to say, Prado... Vive! does not quite summon up the spirit of its subject's music. The weakness lies in the arrangements rather than the performances. As a textbook example of big band mambo the album does a good enough job, but textbooks were not what first-generation mambo was about. Unbridled fun and pre-mating seduction was where it was at, and this disc is not going to generate much of either.