By Dan Bilawsky
February 7, 2011
Sign in to view read count 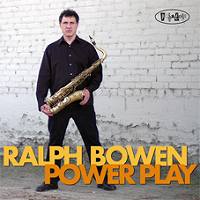 Saxophonist Ralph Bowen has always been an original, despite being tagged as one of the neo-traditionalist young lions of the '80s. A quarter century has gone by since Bowen came to semi-prominence as a member of Out Of The Blue, yet this mega-talent still manages to fly just under the radar, despite impressive dates like this one.

Power Play is a sharp departure from Bowen's previous Posi-Tone albums, which were built on an all-star guitar-bass-drums rhythm section, and placed trumpeter Sean Jones next to Bowen on the frontline. For this, his third record for the label, Bowen is the lone horn player and he enlists pianist (and label mate) Orrin Evans to take the role of harbinger of harmony previously held by guitarist Adam Rogers.

The program is all Bowen-based material, save for a classy take on "My One And Only Love," and the saxophonist often shares the spotlight with Evans. Both men insert some chromatic lines into their soloing on "K.D.'s Blues," but they take two very different approaches beyond that point. Bowen becomes more rhythmically frantic and fearsome after his brief, descending chromatic caper, while Evans uses his turn to launch into bluesy statements. "Drumheller Valley" shifts the focus to Evans at first, but Bowen delivers some playfully dancing work, atop bassist and former Out Of The Blue band mate Kenny Davis' lines, that deserves mention. The saxophonist then reclaims his position in the drivers' seat, delivering swooping melody lines ("The Good Shepherd") and sweet seduction ("Solar Romance") with equal skill and measure.

Davis and drummer Donald Edwards serve as support crew, rather than soloists, on the majority of the album, but both make invaluable contributions to the music. Edwards provides solid swing of all stripes and colors, from fast and driving to slow and loose, and he drives "Walleye Jigging" with his choppy, shifting cymbal work. The drummer briefly gets an opportunity to cut loose over a vamping pattern on this track, but he proves to be more impressive when trading twelve-bar solos on "Two-Line Pass." Davis demonstrates a plucky presence when it counts, but his lines are rounded out for maximum support on the softer material. While he's clearly the most introverted artist on the album, his strong solo skills steal the show on "Jessica."

Power Play, with its mixture of driving, thought-provoking material and gentler journeys, demonstrates that power manifests itself in different ways, and remains ever-present within the work of saxophonist Ralph Bowen.