By Chris Kompanek
December 8, 2009
Sign in to view read count 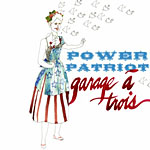 The lines between jazz and rock can become blurred inside of a really good groove. That's exactly what happens on Garage a Trois' Power Patriot. In spite of its hokey title with red state overtones, the ten songs it contains are tightly constructed jams composed largely by Mike Dillon and pianist Marco Benevento, whose own trio focuses on indie-rock- based jazz. Upon opening the CD, it's clear that this is not a typical jazz album. The inside cover art is a color illustration of two cuddly stuffed animals copulating doggie style, which is a perfect approximation of the rebellious edge that permeates Garage a Trois' sound.

The first two tracks of Benevento's compositions take jazz lines and layer them with distortion and heavy beats provided by Stanton Moore that pulsate rather than swing. While there is plenty of improvisation to be had from him and Dillon playing what he calls an "electric doorbell machine" that is made up of a variety of instruments from vibraphone to mallets and Latin percussion, it is largely unheard through Benevento's fuzz. It's only on the third track, "Dory's Day Out," that Dillon's crisp sound moves into the foreground on the first of his five compositions on the album. Skerik provides rich and resonant sax lines throughout the record, bringing to mind the joyousness of Flim and the BB's while smoothing out the rough edges of the expansive and sometimes dissonant record. He also contributes two compositions, including the title track and "Purgatory," which is built around a soft melodic line that transforms throughout the song, reaching a metal ferocity before returning to its tranquil roots. The same could be said for the overall arch of this impressively ambitious album, one constantly pushing the boundaries but that manages to end on a very pleasing note.