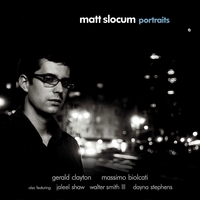 The trio tunes here define crispness and diversity, whether it's Clayton's nimble piano on "Cambria," Slocum's quicksilver drumming on the workout "Shadows" or Clayton's lush styling, Biolcati's murmuring pizzicato and Slocum's shimmering cymbals meshing perfectly on the impressionistic "For Alin." They also play light-hearted tunes, like the title cut and "Avenida del Paraiso," with the same skill and facility.

Guest appearances by several fine saxophonists give Portraits even greater depth. Walter Smith III's tenor cruises over hill and dale on "Homage" and his dreamy tone, with Slocum's dramatic use of mallets, enhance the beautiful Duke Ellington ballad "Daydream." The neo-hard bopper "Seven Stars" features Jaleel Shaw and Dayna Stephens going mano a mano on alto and tenor respectively. Their horns debate furiously throughout the tune, with counterpoint and occasional agreement, until Clayton steps in as a rhythmic mediator. "Illusions and Delusions" is a delightful slice of jazz noir; Stephens' breathy opening notes and fog-shrouded playing highlight this song's mysterious and intriguing atmosphere.

Matt Slocum's defining trait is smoothness. It shows in his measured drumming, the intelligence of his composing and his skill and imagination as an arranger. Portraits makes it clear that, with this excellent premiere, Slocum steps out of the box as the full package.