By Dan McClenaghan
October 21, 2007
Sign in to view read count 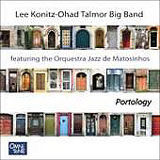 Portology is the third in a series of CDs featuring a fruitful collaboration between alto saxophonist Lee Konitz and saxophonist/composer/arranger Ohad Talmor. With a fifty year-plus career behind him—most of it involving small group work—it's hard to believe that tPortology is alto saxophonist Lee Konitz' first outing fronting a big band. Not that he hasn't played in the format before, with Stan Kenton early on, and with the not-quite-a-big-band 1949-50 Birth of the Cool (Capitol Records, 1957) sessions with Miles Davis.

Konitz, though he came up in the Charlie Parker era, never even flirted with Parker's style. He has been, throughout his career, an idiosyncratic improviser/player who works a sort of loopy anti-bop phraseology that seems closer to Eric Dolphy's sound—in a more restrained, gentle, and perhaps beatific fashion.

The three discs with Talmor—Inventions (Omnitone, 2006 ), New Nonet (Omnitone, 2006), and now Portolgy—suggest a Gil Evan/Miles Davis relationship between the two musicians; and indeed, Talmor's arrangements for Portugal's Orchestra Jazz de Matosinhos have an airy—though slightly skewed—Evans-esque feel to them, with lots of space for Konitz to blow his warm, woody alto tone around the Orquestra's soft pastels.

The set opens with a Konitz classic, "Sound Lee." It's an inspired take on the tune, with Konitz and the band sparring, pulling the punches before Andre Fernandes offers up a guitar solo that smolders into another Konitz blow-fest full of twists and loops and turns.

All of the compositions here—except "Sound Lee"—are collaborative efforts from Konitz and Talmor: the bright, Third Stream-ish "June '05," the dark-tinted "New Ballad," the jagged "Ornetty," the pensive and melancholy "September 11th" and the swaying, swinging, five-part "Rhythm Sweet."