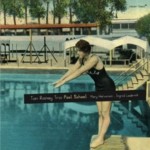 Though there are more substantial things to observe about Brooklyn-based drummer Tom Rainey's Pool School, let's start by saying that the disc's hand-tinted, faux 1930s cover art is among the more stylish to have emerged so far in 2010. And even if the imagery is most immediately resonant of summer in Portugal, the Clean Feed label's home turf, intentionally or not, there is a connection to the music on the metal (yes, it does have something to do with deep ends).

Remarkably, the album is the first to be released under his own name by ninja of nuance Rainey, from the early 1990s a prominent figure on New York's Downtown scene. In a 2004 interview with All About Jazz, he declared himself creatively fulfilled by his role as sideman/collaborator, "playing with friends who trust me," and revealed no plans to form his own band. Whatever it may be that has caused him to change his mind, ears laugh at their good fortune.

The two friends who collaborate with Rainey here are guitarist Mary Halvorson and saxophonist Ingrid Laubrock, each a major new voice on her instrument. Both can create intensely visceral music yet are equally at home on more cerebral, long-form material, be it pre-composed or improvised. Both are sonic adventurers significantly extending the lexicons of their instruments. Stir in Rainey's yin/yang rhythmatism and fascination follows.

The album has echoes of Laubrock's wholly in-the-moment, collective improv suite, Sleepthief (Intakt, 2009), on which Rainey made up a trio with pianist Liam Noble; though not completely improvised, Pool School has a high ratio of sustained, unscripted, collective invention. But variety of atmosphere and form is a hallmark of the set. The 12 tracks move adroitly between the composed and the improvised, the inside and the outside, the sun lounger and the deep end. It's often impossible to tell where the one starts and the other begins.

Is the wonderfully synchronous coming together of all three players which happens on "Pool School" itself 2:38 minutes in, for instance, the result of experience and empathy or pre-planning? Similar moments occur throughout the disc—some, such as "Home Opener"'s halfway transition from the voluptuous to the spiky and "Coney"'s reverse direction shift, sounding as though they were deliberated in advance by the musicians.