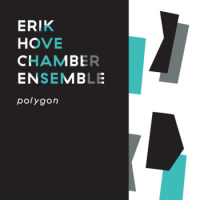 Vancouver-born, Montreal-based alto saxophonist/composer Erik Hove is a compelling emergent leader, already a busy sideman on the city's scene, involved in all sorts of projects and playing with many local heavyweights since proving himself with the award-winning urban jazz Soundclash project he formed while in New York, studying with Greg Osby, and revived in Montreal, eventually releasing an album under his name with the discerning Effendi label in 2008.

With his latest, the Erik Hove Chamber Ensemble, he leads a significant number of musicians in order to incorporate plush spectral fields within explorations of more traditional structures that incorporate a mix of compositional techniques and concepts. The tentet released its first album, Saturated Colour, in 2014; Hove builds on this critical success with Polygon, expanding rather than reduplicating, offering a slightly-different set of vivid imagery which, at times, carries the playfulness or tenseness reminiscent of a Bernard Hermann score whilst betraying an obsession with time straight from its tightly- patterned opener, "Tessellation."

Hove isn't a pioneer; much like Soundclash's inclusion of a turntablist to a jazz set wasn't new, the exploration of spectral music, including microtonality, is well represented since Gérard Grisey established the academic foundations Tristan Murail helped define in the '70s. Rather, what marks Hove as a meaningful composer and leader lies in his ability to fuse highbrow strategies and atypical elements through music that tickles brain and gut in a universally, naturally appealing and fresh way.

As such, qualifying this as spectral music is inexact; certainly, sonic spectra is an element exploited by Hove, blending individual voices, or different constituent pitches, to paint resonant, sometimes pulsating, textures and colors that can be sculpted in time—and with quarter tones—the coherence giving the music a dynamically-controlled sort of acoustic glow, oft sectioned by the drum and double-bass, over which thematic leads do their thing. Yet, even in a timbral piece like "Inversion," a shift occurs, and it never feels like his focus, just a natural part of all the disparate elements he manages to bring together.

And despite the obvious tightly-written and rehearsed aspect, the music does impart a sense of freedom and immediacy. The nested looping improvisational approach of Steve Coleman's M-Base Collective seems to be a contributing influence, here played out within contemporary and classical structures and sounds, while the way Hove slices the textures, revising the roles of soloist and collective to expand more serialized, narrative structures, brings to mind the soundscapes of Fieldwork (Vijay Iyer, Steve Lehman, Tyshawn Sorey).

Given the ensemble's improvised facet, an important personnel change occurs on Polygon: Violinist Josh Zubot, a veritable free-form force and solid part of the cluster formed by Hove, flautist Anna Webber, bassist Rémi-Jean Leblanc, and percussionist Evan Tighe—habitual collaborators on various projects and acclaimed, busy musicians—is replaced by Kate Bevan-Baker, though it is the abundantly-skilled Jean René, appearing on viola, who delivers deeper-toned solo work in Zubot's absence. Trumpeter Andy King is back, his brassy-yet-lavish tones acting as principle voice on a few tracks.

Hove shows his ever-growing prowess as altoist, and, on "Fractured," displays remarkable connivance on flute with the gifted Webber, given plenty of opportunities to show off her considerable talent throughout the album. Also of note is Leblanc and Tighe's complicity, especially on the rhythmically complex, "Morse Code," and for their capacity to firmly impose a structure anywhere.

Overall, the musicianship is upper-caliber fantastic, even from those whose individuality is subsumed into a single, sonorous voice or stealth tone, for the unison required to paint such rich colors and intertwined pulses can only be pulled off with talent, ditto for the ability to marry rhythmic and harmonic contrasts that can easily tip music into a cacophonic void, or to delve into such spacey, special-effect-filled adventures like that offered by the way-out "Drift (re_synthesis II)" and the way the trip carries through in the broody closer, "Octagon."

Truly a sonic journey worth the undertaking, painted with lush polyphonic harmonies, offering atmospheres and grooves and dialogues, even surprises, that are sure to captivate even the less courageous listeners, Polygon is another consistent step towards defining a career that isn't just about making music, but focused on making a noticeable musical contribution.