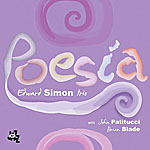 With a winning combination, it's rarely a good idea to mess with it. Pianist Edward Simon has recorded with a number of great trios, including the one at the core of Simplicitas (Criss Cross, 2005). His music took a giant leap forward, however—in terms of composition, arrangement and performance—with Unicity (Cam Jazz, 2006), featuring bassist John Patitucci and drummer Brian Blade. The greater freedom, latitude and time that Cam allows its artists is surely another factor, as opposed to Criss Cross' one-day, six-hour sessions (which still, remarkably, manage to result in consistently fine releases). Patitucci and Blade return on Poesia, an album that takes the successes of Unicity to another level.

Simon's writing continues to mine the nexus of head and heart, but he's also getting better at finding that often elusive juncture. Cerebral music is all well and fine, but if it doesn't resonate, it has little meaning. Simon's music—whether it's a complex chart like the episodic and dramatically expansive "Intention" or the spare melancholy of "My Love For You," a solo piano piece that bookends Poesia with two different takes—has always been emotionally deep. Still, as time passes, his innate ability to create effortless contexts of no small challenge for his trio that reach deep into the heart and soul continues to be a compositional definer for this virtuosic but never excessive pianist.

Simon's interests reach far and wide, including no small amount of classical references, hints of his own Latin heritage and, of course, the jazz tradition. But while many have created arrangements for saxophone legend John Coltrane's iconic and change-heavy classic, "Giant Steps," few have given it this extensive a makeover. It's all there—the relentless chord changes, the unmistakable melody—but Simon has twisted it on such an angle that it becomes a quirky tune that shifts from staggered rhythm to occasional clear swing as both he and Patitucci weave cogent melodies through it and Blade acts as both responder and driver.

Simon's an economical player who never overstays his welcome, choosing instead to compose material with longer narratives and, while leaving plenty of room for the group to explore, avoids feeling anything approaching a "head-solo-head" aesthetic. Instead, there's an almost cinematic feel to tunes like "Winter," which has an unmistakable theme that's returned to following a particularly inventive and motivic-centric piano solo.

"One for J.P." is a bright piece that's a mélange of shifting meters and near-funk, even as Patitucci overdubs an upper register harmony line on electric bass, augmenting Simon atop his more pulse-centric acoustic bass. "Roby" is a dark-hued ballad driven by Blade's soft mallets and Simon's elegantly light touch, while the title track is an up-tempo composition that, in its own distinct way, feels a kinship with another Cam artist, trumpeter Kenny Wheeler.

Simon's visibility continues to grow and, with the at once challenging and beautiful Poesia, he has once again delivered an album that deserves a spot as one of the best piano trio records of the year.