By EDWARD BLANCO
March 1, 2017
Sign in to view read count 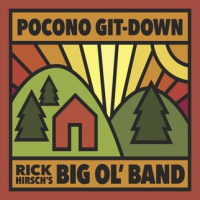 A native of State College, PA and long-time fixture in the small cities, college towns and regional area jazz scene, saxophonist and educator Rick Hirsch sought to promote and celebrate this overlooked part of the musical community by drawing out twenty of his favorite small-town musician-friends and record in the Pocono Mountains. The result, the audacious and swinging Pocono Git-Down big band album of a gritty and powerful orchestral sound from a group of professional players that one may not be familiar with, otherwise known as Rick Hirsch's Big Ol' Band.

Bolting right out of the starting gate is the raucous high-powered "Giddyup!" with tenor saxophonist Greg Johnson and trombonist Jim McF alls on featured solos riding a brassy attack by the band on one of the liveliest pieces of the set. With drummer Kevin Lowe leading on the introduction, the title-track is cut in the same mold as another blistering burner featuring trombonist Jay Vonada, trumpeter Eddie Severn and pianist Steve Rudolph providing the solos. Though brief but beautiful, "Tonight, We Tango" showcases Hirsch on the tenor with guest appearance from Alex Meixner on the accordion as the group delivers a very spicy and hot Latin number that's designed to move the shoulders and shake the legs.

The music finally settles down on the slow, but delicate Eric Clapton ballad of "Wonderful Tonight" highlighting Rudolph with gorgeous piano lines before the rest of the band weighs in lightly. The beat begins to pick up a bit after beginning warmly on "The Old Chief's Lookout" when the brass kicks in featuring McFalls on the left trombone, Vonada on the right trombone and Greg Johnson delivering stellar solo phrases on the soprano supported mightily by the rest of the band.

The leader takes center stage on the buoyant "Metroliner" as the group gears up for another Latin-tinged sizzler on "Mambo Over the Mountain" containing an anticipated percussive flair featuring the drummer and Bob Velez on percussion as well as sparkling saxophone salvos from altoist Kate Anderson and tenor man Pete Barenbregge for one of the finest pieces of the album.

Closing the recording is a terrific rendition of Michael Jackson's classic "The Way You Make Me Feel," highlighting several members of the band on solo moments putting a temporary cap on an explosive session of big band jazz. Kudos to Rick Hirsch and his very able Big Ol' Band for producing a sensational and exciting big band recording that deserves serious attention. For anyone who questions whether big band music is alive or dying, look to the hills of Pennsylvania, find Rick Hirsch for the answer.