BY BUDD KOPMAN
September 10, 2015
Sign in to view read count 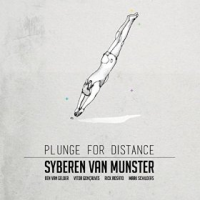 Originality just refuses to stay hidden, and with his debut, label-ignoring album Plunge For Distance, guitarist Syberen van Munster should be hit by the spotlight of recognition.

Born in Amsterdam, van Munster graduated in 2009 from the Conservatory of Amsterdam, and moved on to continue his education at the Aaron Copland School of Music in New York, where he obtained his Master's Degree in 2011. He has won the Dutch Woodwinds Ensemble Composition Prize, and recently was a semi-finalist at the Montreux Jazz Guitar competition. He is a recipient of the Huygens Scholarship, which provided full-tuition for his Master's Degree, as well as a scholarship from the Van Den Ende Foundation.

But enough biography. From the opening notes, the compositions and playing on Plunge For Distance have the mark of originality, deep musicianship and, perhaps most importantly, a very wry sense of humor. Supporting van Munster are four musicians who, from the aural evidence, share his quirky, but serious musical outlook: alto saxophonist Ben van Gelder, Vitor Gonçalves on accordion and Wurlitzer, bassist Rick Rosato and Mark Schilders on drums.

Adding the accordion to the mix sounds surprising at first, but it ends up blending in as just one of many influences that van Munster brings together. Naturally featured on "La Sorella" and "Cais" (by Milton Nascimento, and the only composition not by van Munster), the accordion adds a feeling of lightness and whimsy to the music whenever it is used.

van Munster's music has an unsettling quality to it, because he seemingly purposefully refuses to stay with one vibe for very long, even within a tune. There are no hints as to what is going to happen next, and yet everything proceeds logically, with the totality of the music being clearly from one mind.

One tip-off to the uniqueness of the music is the fact that van Munster is not heard soloing in the opening tune, "Röyksopp," until almost four minutes through the six minute tune. Some of the music is beautifully atmospheric, while at other times a driving groove breaks out; some of the music is extremely happy, and some has a bit of melancholy.

There is no doubt that van Munster is an exciting and original new talent, and also no doubt that he can only expand his presence in the years to come.

Plunge For Distance actually requires multiple listens due its wide range, but this is time that is extremely well spent. Bravo!