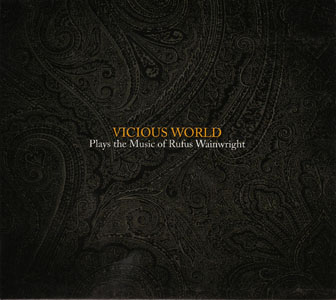 Vicious World might have a field day on its tribute to the music of Rufus Wainwright, except the tunes are rarely that lighthearted. Let's just say the septet is moved to musical tears by the singer/songwriter's earnest melodies and bittersweet harmonies.

Even that's putting it mildly. Anxious strings introduce Aaron Irwin's alto sax on the dejected "Going to a Town." "Natasha" pits the innocence of violin and clarinet against Matthew McDonald's bittersweet trombone, choreographing a beautiful, fragile ballad. "This Love Affair" features McDonald brooding over a rock feel with Sebastian Noelle's splayed guitar, while the guitarist spirals and pauses over the reflective chord changes of "The Art Teacher." Wainwright's music never lets too much light (or lightness) in, and Vicious World's probing solos and clever arrangements create a canvas from multiple shades of darkness.

Violinist Eliza Cho and cellist Maria Jeffers are put to poignant use throughout, even if they often stick to tremolo effects. Joined by bassist Thomson Kneeland on "Memphis Skyline," they form a rich string trio that eschews lush sentimentality or pseudo-classical allusions.

More upbeat moments still well up, with tears alongside the laughter, as the whimsical stage band ambiance and Danny Fischer's popping snare drum define "Matinee Idol." "Millbrook" is a short, tender hymn to the composer's high school, in quaint counterpoint under Irwin's saxophone, while his clarinet work on "Peach Trees" offers a playful foil to the cool alto cultivated on the rest of the album.

Noelle and Kneeland regularly play with Irwin's New York-based band, and Vicious World (named after another Wainwright tune) has been exploring the music of Wainwright and other contemporary pop artists since 2005. Their familiarity with each others' styles is evident, as are the structural and emotional nuances of this repertoire. "Dinner at Eight" ends the disc with a lazy waltz, fading in and out of free time, giving the impression of seven old friends recalling the good times and the bad, as soloist and accompanist are locked in sensitive interplay.

Vicious World treats Wainwright's songs as it would any jazz standard: with an open mind and solid musicianship. An abundance of melancholy aside, this album raises the spirits after taking them on several emotional detours. Difficult journeys once again turn out to be the most rewarding.