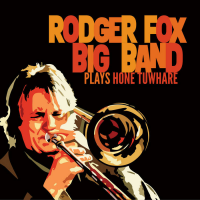 New Zealand's flagship jazz ensemble, the Rodger Fox Big Band, marks its fiftieth anniversary with an impressive homage to "the people's poet," Hone Tuwhare (1922-2008), on the centenary of his birth. As is pointed out in the album's liner notes, Tuwhare "was loved and cherished by New Zealanders from all walks of life. Touring tirelessly, Hone shared his talent and inspired audiences in every corner of the country from primary and secondary schools to universities, factories to art galleries and prisons. As he traveled, Hone encouraged others to write, express themselves, create and celebrate life."

Inspired by Tuwhare's verse and using it as a guidepost, the ten selections here were composed and arranged by some of New Zealand's most accomplished jazz artists including four members of the orchestra: Fox himself ("Miles Davis"), pianist Anita Schwabe ("The River Is an Island") and saxophonists Bryn van Vliet ("Roads") and Oscar Laven ("Sun O"). Callum Allardyce penned the introspective opener, "Hotere," Liam Ryan "Bird of Prayer," Lauren Ellis "Rain," Daniel Hayles "Time Out" and Godfrey de Grut "Haiku," while no less than seven writers collaborated on the picturesque "Child Coming Home in the Rain from the Store." Tenor saxophonist Louisa Williamson is showcased on that number, as she is on "Hotere."

Without poring over specifics, suffice to say that each of the writers has aced the arduous task of recasting poetry to song. In brief, this is contemporary big-band jazz of the highest order (think Maria Schneider then add intensity and swing). While it's not clear that Tuwhare wrote a poem about Miles Davis, Fox reawakens the spirit of America's legendary trumpeter (with muted intro by Cameron Robertson) on the album's longest (and arguably most enticing) number, which clocks in at 11:40. Solos are by Fox, baritone Dylan Holmes, alto Nicholas Baucke-Maunsell, tenor Laven and guitarist Gus Reece. "Miles" precedes another melodious and tasteful essay, Schwabe's "The River Is an Island," featuring Reece, Laven (on soprano) and van Vliet, and Ellis' steady and refreshing "Rain" (solos courtesy of Laven and trumpeter James Guilford).

Fox is front and center on de Grut's rhythmically powerful "Haiku," van Vliet and Schwabe on the luminous and handsome "Time Out," while Guilford, Laven and Philip team with trombonist Kaito Walley to enliven the buoyant finale, "Sun O." As elsewhere, the orchestra and soloists are securely in the pocket. You needn't be a lover of poetry to realize that the Rodger Fox Big Band has produced another in a growing series of big-band masterworks.

Hotere; Bird of Prayer; Roads; Miles Davis; The River Is an Island; Rain; Haiku; Time Out; Child Coming Home in the Rain from the Store; Sun O.