Home » Jazz Articles » Andrea Domenici Trio: Playing Who I Am

Andrea Domenici Trio: Playing Who I Am 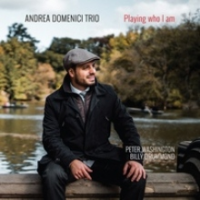 The traditional road to musical success has been to make and promote a first recording, aiming for the kind of critical and public attention that leads to prestigious bandmates and gigs. But the fine pianist Andrea Domenici paves a new path with his masterful debut Playing Who I Am, since it arrives after he has already performed globally, in top New York City venues like Jazz at Lincoln Center, Dizzy's Club Coca Cola, Smalls, Mezzrow, and Smoke, and with some of the biggest names in jazz, including Harry Allen, Roy Hargrove, Kenny Washington, Gary Bartz, and Wynton Marsalis. A serious student, Domenici also has degrees from both the New School and Julliard. Finally, his colleagues on this first outing are no less respected and busy than Peter Washington on bass and Billy Drummond on drums, with top pianist Dado Moroni doing the liner note honors.

Such impressive pedigree can set up serious expectations, so it's a pleasure to report that they have all been met—and then some. Playing Who I Am is a deeply satisfying session at the highest level of musicianship, nicely balanced with three tributes to Thelonius Monk, three nods to the Great American Songbook, and three impressive Domenici originals dedicated to important people in his life, such as Kenny Barron ("For Kenny"). The record is full of joy and lyricism, crisply recorded, and underpinned by the pianist's superb feel, technique and originality.

Some highlights: Domenici's powerful version of "It's Easy to Remember," where the melody is stated so simply that its full beauty can emerge without any distraction. Although it's nearly ritualistic to lift the key midway to maintain interest, this pianist chooses not to, creating a tasteful rendition that is riveting without such devices. He also blows the dust off "You Don't Know What Love Is," usually rendered as a torchy ballad, by giving it a film noir vibe that is ironic and slightly tongue-in-cheek. It takes a minute to recognize the subtle references to "Santa Baby" and "Why Don't You Do Right," vamps long associated with the slyly winking vocals of Eartha Kitt and Peggy Lee.

Domenici's fascination with Monk is evident in his choice of tunes, such as the playful opener, "We See," the rarely-heard "Shuffle Boil," an unhurried, soulful "Ruby My Dear," and his own bouncy original "Bubba," which manages to salute Monk without copying him.

The pianist gets swinging and elegant support throughout from Washington and Drummond, whose expert trading on the first track heralds the presence of an exceptional trio. All told, Playing Who I Am is as straightfoward as its title—a tasteful and impressive debut, it firmly positions Andrea Domenici as a distinctive talent to watch.

We See; It's Easy to Remember; Daniela; Bubba; You Don't Know What Love Is; Shuffle Boil; Ruby My Dear; For Kenny: Melancholia/Goodbye.