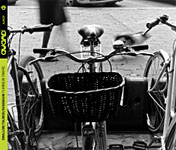 Talmor is a master at making melody his subject matter. He exhibits complete confidence in his improvisations as he moves through a lilting expressive spectrum, touching only occasionally on a steady upbeat tempo. In "Three Two You," his playing is relaxed and Paul Desmond-like. In the intro to "Days of Old," he plays the purest of tones to shape a melody out of which slides one of Swallow's solo interludes. Talmor fills "Here Comes Everybody" with separated phrasings in keeping with the heaviness of the beat, but turns immediately inward in "Quiet Inside" and "Undress Under Duress" to extract fluid, tender, embracing lines. "Too" rolls out a duo conversation between bass and tenor that is all too short, but demonstrates how well the two can interact.

The drums and bass never wander away from the center that the tenor constructs, except for the brief offbeat abstract improvisation from Nussbaum and Swallow midway through the record. They revere the horn's lead in the musical portrayal of moods. On "Days Of Old," Swallow illustrates his own awareness of quiet and gentleness in a brief solo and in "Quiet Inside," he trails off Talmor's high- to low-pitch swings. Nussbaum displays a seemingly endless vocabulary for establishing a warm and laid-back atmosphere as he taps the skins with his hands in "Warmer in Heaven," lithely uses mallets for "More Nuts" or creates swells of sibilance on the aforementioned "Undress Under Duress."

Playing in Traffic closes as it opens with "Up Too Late," Swallow mapping out the pulse, Nussbaum snapping the sticks right behind him and Talmor percolating with his horn one final time.

Playing In Traffic; Days Of Old Intro; Days Of Old; Here Comes Everybody; Undress Under Duress; Warmer In Heaven; Up Too Late.