BY JOHN KELMAN
December 5, 2005
Sign in to view read count 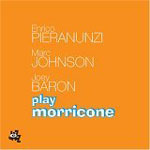 Sometimes the most unfortunate circumstances can yield surprisingly positive results. Bassist Marc Johnson and drummer Joey Baron were already in Italy in 1984 for the start of a tour with pianist Kenny Drew when Drew's wife became suddenly ill. With Drew returning home to Denmark, Johnson and Baron were left with few options. When pianist Enrico Pieranunzi showed up after receiving a phone call from someone at the club asking if he'd like to play, he found the two in an understandably dejected state.

Still, the Bill Evans-influenced Pieranunzi jumped at the chance to play with Johnson—the late pianist's bassist in the final years of this life. Twenty years later, in the liner notes to Play Morricone, Pieranunzi recounts of how Johnson and Baron's less-than-enthusiastic mood transformed immediately in response to the instantaneous chemistry that emerged that evening. The serendipity of that chance meeting has resulted in a trio that continues to periodically record and tour to this day.

The US version of Play Morricone represents a compilation from two CDs—Play Morricone (Cam Jazz, 2002) and Play Morricone 2 (Cam Jazz, 2004)—released by Cam's US distributor, Sunnyside Records. It's unfortunate that the decision was made to create one release when both sessions were worth issuing, but it's good news that any material from these two subtle yet evocative recordings is seeing the light of day in North America.

Ennio Morricone represents perhaps the quintessential Italian film scorer of the past half century. A primary raison d'etre of Cam Jazz has been to take film music from composers like Morricone and Nino Rota, and see it reinterpreted in a more extemporaneous manner. Adapting film music can be risky business—it's essential to retain the core of the music, all the while opening it up for richer exploration. Pieranunzi is no stranger to the concept; his FelliniJazz (Cam Jazz, 2003) was a more expansive quintet look at some of the best music from the legendary director. Here the approach is more intimate, although the trio certainly don't lack its own kind of energy on tracks like "Le Man Sporche, which starts impressionistically enough, but morphs into a potent example of just how vivid this trio's interpretive simpatico is.

Morricone's inherent lyricism remains almost untouched on the melancholy ballad "Addio Fratello Crudele, where Baron's delicate brushwork and Johnson's elegance working closely with Pieranunzi's own gently purity. "La Domenica Specialmente is more significantly reworked and reharmonized, as is the hard-swinging "I Malamondo. Pieranunzi's dissonant shots lend humour to "Mio Caro Dottor Grässler, a tune whose understated magic is picked by Baron as a highlight of the sessions.

With Johnson and Baron's already well-established reputation in North America, Pieranunzi is only now beginning to get the recognition he deserves, largely through Sunnyside's distribution of his more notable Cam Jazz titles. Like British pianist John Taylor, his greater stature in Europe and relatively unknown status in North America remains curiously unfortunate for fans of mainstream-centric but always forward-thinking piano jazz.

Visit Enrico Pieranunzi and Joey Baron on the web.