By Matthew Miller
September 19, 2006
Sign in to view read count 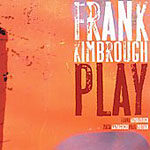 More than the presence of Paul Motian on this, Frank Kimbrough's seventh album as a leader, harkens to the legacy of Bill Evans. The pianists share an unparalleled grace of touch and musicality that subtly penetrate the ear, dancing with the innate, ineffable rhythmic sense that makes repeated listening a pleasure. And like Evans, Kimbrough creates and develops musical settings on Play that seem as organic and inevitable as a sunrise or a flower's bloom.

Of course, comparisons of any kind fail to adequately sum up this music. It is vibrant, fresh and entirely egoless. Simple themes are stated by Kimbrough and expounded upon by the dynamic tandem of Masa Kamaguchi (bass) and Motian (drums). Starting with the ethereal ballad "Beginning, a reflective but focused mood pervades the entire album; Kimbrough slides gracefully in and out of time, weaving around Kamaguchi's buoyant lines and Motian's dry colorations.

Following "The Spins, an aptly titled tune performed in a drunken waltz tempo, the trio shows its musical depth on "Lucent, a performance of exceptional beauty. Kimbrough states the pensive melody over a quasi-march tempo from Motian before seamlessly drifting into a sparkling improvisation where each note builds to a coherent whole and every lilting phrase lands snugly into a waiting rhythmic pocket.

Two pieces composed by Motian make an appearance on Play, and both are striking in their originality and harmonic twists. The first, "Conception Vessel, vacillates between rubato melody sections and driving swing solos. Motian is the pacesetter here, dancing behind the convoluted melody before beating decisive quarter notes, driving Kimbrough and Kamaguchi to edgy heights. His mournful original "Play reiterates the reflective mood established at the album's onset and leads perfectly into Kimbrough's thoughtful ode to the events of 9/11, entitled "Regeneration.

Play ends as it began, with a restatement of "Beginning, a theme that seems to be the mantra of this trio. It also marked the beginning of the late set on a rainy Thursday at Jazz Standard last month.

Bassist Jay Anderson proved to be an apt replacement for Masa Kamaguchi as the band performed pieces from Play as well as the oft-neglected standard "Sweet and Lovely. As always, Kimbrough turned in a stellar performance and the trio succeeded in conveying the quiet air that characterizes Play. Dressed in billowy Eastern garb and sporting a freshly shaven head, Paul Motian was fascinating to watch in person. Reaching out to tap the bell of the ride or beating intermittent patterns on hi-hat, the sage drummer seemed to view his set as more of a vast color palette than a time keeping device. His focus on mood and color make him and Kimbrough a perfect match that any music fan could appreciate.