By Matt Cibula
February 1, 2006
Sign in to view read count 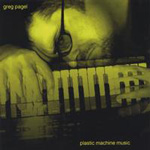 Greg Pagel is a nut, and I mean that in the best way. I have never met him, even though we both live in Wisconsin—I know, you're shocked that we're not all huddled around the same ice-fishing hole and/or Lambeau Field brat grill, but there you have it. But yeah, Plastic Machine Music is proof enough that the man is off his damned rocker, and proud to be so. And I think it is a very good thing for all of us that he is.

This recording is basically just him on a variety of instruments both real and fake, making one of the funniest jazz-related discs I've ever heard. There's humor here from the very first track, where Pagel says that anyone who copies his CD will be shot; there's humor in the music, like in the discordant accordion funk of "It's Hard Work" and the pastiche of new wave synthesizers in "The 80's Sucked"; and even in song titles like "Flesh-Eating 7th Chords" and "Santorum." (If you don't get that one, you had better do some research.)

His is a big Dadaist sensibility, where anything can happen in service of a song. Sometimes he'll construct a fake scat solo over an electronic loop with sampled piano ("Oddbop"). At other times, he might need to put a fake-Chinese wind-chime top over a lazy hip-hop-esque beat ("Mission Accomplished") or let synth squiggles run amok, like someone was holding mid-period Herbie Hancock over a pot of boiling oil ("Fact-Based Initiatives"). It's a hoot, as we say up here, a real hoot.

But Pagel has another side, too. Despite some of the wacky samples and I'm-so-weird touches, the title track is credible modern fusion in 7/8 time. "Andy Plays the Guitar" is really kind of hot, with his brother Andy pulling off a stunning funk riff. And if track 9 wasn't titled "The Sound of Mucous," you might actually think that Pagel had some very serious ideas about how to have fun with electronic music. (Or at least think that he's just done a hilariously effective parody of Hiromi's entire career. I love Hiromi, but this could be construed as a pretty great burn.)

That's the only drawback here: this is a punchline disc, with not much more to it. Which is a shame; I mean, we all need fun strange funny electronic music in our lives sometimes, but we also need depth and truth and beauty, and every time you think any of that might be coming, Pagel undercuts himself with something self-consciously wacky. And that's fine, if that's where he's going. But I get the sense there's more to him.

I'm interested to see where Greg Pagel goes in the future. Plastic Machine Music is adorable and light as a feather and a breath of fresh air. We could have a new class clown on our hands, so sorely needed in this over-serious genre. But his talent is a prodigious one, and he could end up giving us something a little more real someday.