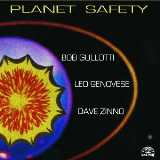 Despite its concentration of esteemed jazz pedagogists, the title of Boston's greatest pianist should now be bestowed upon 29 year-old Leo Genovese. Some may consider this a bold statement, but this Argentinean—currently retracing the steps of Chick Corea by making his home in Chelsea, is a flat-out brilliant player. He combines frightening Rubalcaba-esque chops and mystical Ra-esque spirituality in a strikingly scintillating package. Genovese is best known for his membership in Esperanza Spalding's touring trio and for his work on the superb 2006 debut of Cuban drummer Francisco Mela (featured on Genovese's 2003 debut Haiku I).

Drummer Bob Gullotti and bassist Dave Zinno are arguably Boston's best rhythm section, although it's a dead heat with the one Gullotti helms with the equally lucid John Lockwood in the Fringe (where Genovese's guested to make it a quartet). All three are members of the quartet of Hal Crook, the world's greatest trombonist (but that's another article). Ironic that it took the adventurous Italian label Soul Note to recognize the importance of the level of interplay of this Boston trio and release a well-recorded session from the wilds of New Hampshire.

Fitting that Corea's "Humpty Dumpty" provides the template for this band to show us who they are. Viola-like bow-work from Zinno is set off by colorations from Genovese and rumblings from Gullotti before the entire arco range of the bass is exercised, ensuing the ruminations of an out classical trio. Genovese transitions using dampened, echoing, sequenced sounding patterns, as the intuitive textural interplay takes up the majority of the song. Gullotti clears the airstrip for takeoff, swinging feverishly with the nimble bassist. Genovese begins with swinging bounce, digs into it gradually and then blasts ferociously into the stratosphere, peeling off choruses of chromatic bop with the right hand as fast as the piano can possibly ring back out, stabbing with the left in traditional style, then going staccato and ultramodern, feathering in more chord alterations. Zinno locks at solo's end to the unison head statement and—bam—Planet Safety's mission statement has been aurally transmitted as wisps of smoke emanate from your speakers.

The onomotopaeically musical original song "cycle," "Agitate, Rinse, Spin," shows this is not your father's piano trio. "Agitate" demonstrates Gullotti can clatter with the best free drummers ever as Zinno and Genovese slink around him. "Rinse"'s effortless walking pulse spurs Genovese's mercurial linearity and of course, "Spin" makes it all new with a cyclical progression that has Genovese functioning as a grunge latin percussionist rather than chops-busting linearist.

Two Wayne Shorter compositions are given sanctified care, showing this band can function solely as a world- class traditional piano trio, with "United" featuring particularly fluid lines from Genovese. The title track, featuring head-bobbing sway, Crossings era vintage keyboard sounds and Zinno on wah-driven standup, show they're comfortable way outside of traditional realms. With this disc corroborating their legitimacy and potency as a band, here's hoping they forge ahead as one.