By Donald Elfman
September 16, 2005
Sign in to view read count 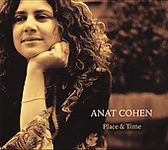 How thoroughly refreshing it is to hear a young musician who really does have a sense of place and time, in the best possible ways! Saxophonist Anat Cohen imbues her tunes and her playing with an understanding of how to use space and rhythm and, having played in many countries, with a feeling for other cultures and where jazz and improvisation are in the world at this time.

Her melodies and her solos tell stories and with a voice that's uniquely her own but also reflects true listening to her predecessors and contemporaries. She has some solid experience—in New York and beyond, with a slot in the Jason Lindner Big Band and in the Diva Big Band as well—and she has used that to create for herself a personality that beautifully expresses feeling.

Her debut album showcases her talent for writing tunes that don't sound like anything else and for choosing tunes by others that are not often played. The lovely title song, for example, is hymn-like but with a rhythm that identifies Cohen as a citizen of both her native Israel and of the world. It's not about showboating as a saxophonist, but it does paint a pretty picture with deftly drawn colors and with the assured talent to make a point.

There's a knockout blazer: Gerry Mulligan's "As Catch Can, a boppish affair in which Cohen truly does create fireworks as a soloist, but never at the expense of the tune. Her horn partner here is trumpeter Avishai E. Cohen, who dances at a fiery pace and beautifully negotiates the tune's complexities.

In person at Sweet Rhythm last month, Cohen had only Lindner from the recording—and he played both acoustic piano and an electric keyboard—but was graced with the presence of the inventive drumming of Gregory Hutchinson and the smart and solid bass playing of Vincente Archer. Though this was a spirited band and the audience was treated to more open versions of tunes from the album—including "87 North and "Place and Time —some of the subtlety created in the studio was lost in the club setting. That said, the performances were electric and in the moment, a taste of the picture-painting of a most talented player and writer.

Place & Time; The 7th of March; Viente A