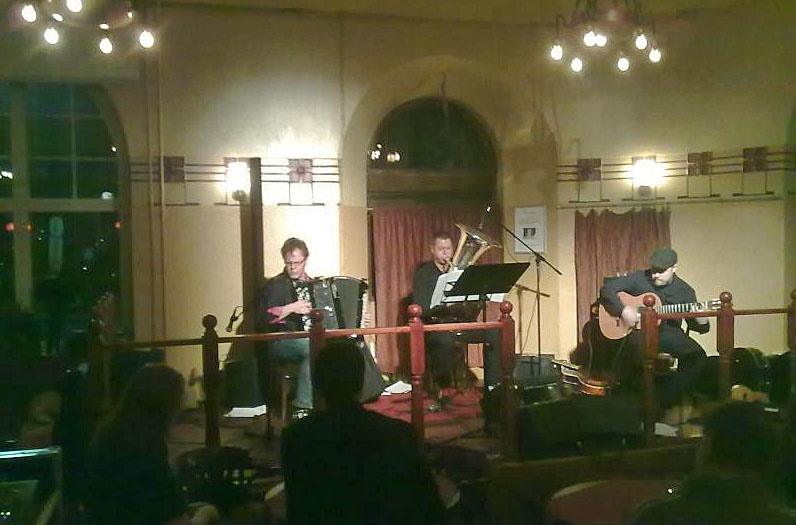 BY ANTHONY SHAW
December 21, 2011
Sign in to view read count
Pipoka Trio with Sam Huber
Rytmihairioklubi
Helsinki, Finland
December 7, 2011
For a band with a name as simple as it is impenetrable, Pipoka embodies all that is exciting yet daunting in modern Finnish jazz. Its two founding members, accordionist Veli Kujala and guitarist Jarmo Julkinen, have now found a stable source of bass in the form of virtuoso tubaist Petri Keskitalo, who adds mellifluous lilts, booms or vibrato, while sharing their dedication to musical excellence and exuberance in performance.
Pipoka's gig in Helsinki's grand, European-styled Granite House bar locally known as Jututupa—where the "Cardiac Dysfunction Club" holds its regular performances—was a prime example of a band finding just the right audience in just the right setting. While the regular young audience of nu-jazz devotees were perhaps under-awed by the pace and dexterity of leader Veli Kujala's accordion—since, in this country, the instrument is rarely considered appropriate for a serious jazz ensemble—for those remaining, the trio fulfilled all expectations of instrumental panache, before being joined for the second set by local R&B singer Sam Huber for some seriously musical pub fun.
The music of the first set comprised primarily the tracks on the trio's latest album, Veto (Rockadillo, 2010)—often Latin-influenced pieces from the pens of all three members, with lead roles constantly swapped between them. When Julkinen put down his cavaquinho or acoustic guitar, Kujala's accordion revealed the Brazilian influence, but he also excelled in raucous dissonant leads, which in turn opened the door for Keskitalo's experimentalism. Pipoka's skewed version of Lennon-McCartney's "Julia" encapsulated this style, while the founders' competence in covering, when the tuba experienced a typical steampunk moment (a jammed valve), showed that their roots are firmly in South America, launching into a newly penned tribute to Brazilian accordionist Sivuca.

With the addition of Huber, the downbeat rather cursory introductions of Kujala were replaced by the hearty humor of a white man who really can use his voice, as well as sing the blues. With a background on the stage, Huber has trod the musician's path, too, as lead singer with local glam-funk band Eternal Erection. Starting with Al Green's "Let's Stay Together," Huber upped the ante all the time as the evening progressed, finishing the main program with a rollicking version of "Proud Mary." For the encore he brought the audience back to ground with local '80s rock band Popeda's hit "Kuuma Kesä" (Hot Summer). But translated into Swedish, this piece also typified the band's eclectic approach, with always a twist of humor in its tail.