By John Eyles
February 8, 2006
Sign in to view read count 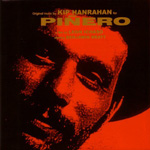 This is the soundtrack album to Leon Ichaso's biopic of Puerto Rican street poet Miguel Pinero, maybe best known for his play about prison life, "Short Eyes. The film itself was described this way in a New York Times review: "The movie, a flashy montage, which jumps around in time and alternates between color and black & white, lacks narrative cohesion. But its agitated style mirrors Pinero's streetwise pre-rap poetry...

Given all of the above, it is no surprise that the soundtrack is highly episodic, consisting of 27 tracks, the majority lasting under two minutes. In typical soundtrack fashion, most titles are prosaic descriptions of scenes from the movie, such as Miguel Leaves Puerto Rico or "Mother's Prison Visit. Despite the rapid changes of scene, the album achieves an impressive coherence, especially given that Hanrahan put together the album by combining newly recorded material with tracks from past albums he produced.

The predominant sound is a low-key, noir-ish Latin jazz fusion, dominated by electric bass, percussion and trumpet, which creates an oppressive sense of imminent danger. The film stars Benjamin Bratt, who voices some atmospheric scene-setting sections of the album; these are used sparingly enough so as not to intrude, but to enhance the air of sleaze and menace. In a large ensemble cast of musicians, key performances come from pianist Edsel Gomez, bass guitarist Fernandez Saunders and particularly trumpeter Jerry Gonzalez.